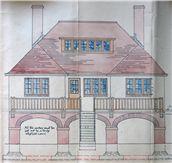 This building plan was submitted to Wallingford Borough's councillors for approval in June 1913.  It shows the new ferry house which was built by the Thames crossing at Chalmore Hole, just south of the town.

The ferry now is long gone, but there had been one at Chalmore Hole since 1787, when the Thames Conservancy had first put in a towpath along the river.  The ferry went to Newnham Murren, a tiny village on the Oxfordshire side of the river, and back again.  Barges would unharness their horses, put the animals on the ferry, then reattach the boat and beasts to walk along the towpath on the other side.

These ferries existed at various points along the river, and were as much a feature of the Thames as the Conservancy's series of pound locks, which do still exist today.  Chalmore's importance for the river's navigation meant that for a brief period in the 19th century, there had even been a seasonal lock there.

This lock, taken out of use in 1883, has a fleeting mention in the book 'Three Men and a Boat'.  Unaware that he has an out-of-date map, Jerome K Jerome intends to stop at the lock but cannot understand where it has gone.  As dusk settles, with still no lock in sight, he is forced to continue his journey for another six miles before reaching Cleeve Lock instead.

The Chalmore ferry was based on the use of the river for freight, and as this use decreased, it gradually became obsolete.  The last ferry crossed the river in 1953.  The ferry house remains on the Berkshire side of the Thames, and is now a private house.