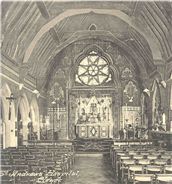 This month’s highlight shows the interior of the chapel at one of Berkshire’s lost buildings (ref. D/EX1675/4/7).

St Andrew’s Convalescent Hospital was built in Clewer between 1865 and 1866. It was one of a number of structures connected to the convent Community of St John Baptist.  It stood between the west side of Hatch Lane and the south side of the Dedworth Road.

The convent had been established by Thomas Thellusson Carter, rector of Clewer.  St Andrew's Hospital became one of a number of its good works. As well as a House of Mercy for fallen women, there were also orphanages, schools and missions as well as convalescent homes.  All of these were pitched at helping those too poor to help themselves.

With the development of workhouses into the local hospitals which formed a mainstay of the NHS, the need for institutions like St Andrew’s gradually diminished. The Hospital itself was closed in 1939 and demolished around 1950.

The Community continued its work in Clewer until the Sisters moved to Oxfordshire in 2000. Its archive is also at the BRO.