During World War Two one of the many activities carried out as part of the Home Front was collecting conkers. The image below shows a carriers receipt for 2 Cwts (101.6kg) of conkers, dated 6th November 1942. It was found in a register of Rotherfield Street School, Canonbury (near Islington, London) [ref. C/ED/H7/5/103; image of the cover is shown on the left]. Children from Rotherfield Street School were evacuated to the North Berkshire village of Steventon at the time as part of the evacuation process. The role of children collecting conkers as part of the Home Front is not unusual. However it raises the question as to what were the conkers used for as in World War One they had been used as part of the production of munitions but with limited success.

Apparently the Ministry of Health were concerned about disruption in supplies, such as of medicines, during wartime and turned to the Royal Botanic Gardens at Kew for assistance.The Vegetable Drugs Committee was established at Kew sometime in 1941 and soon after county ‘Herb Committees’ were busy collecting a variety of herbs. They collected nettles for dyeing uniforms, foxgloves for treating heart conditions and rosehips for their vitamin C. Bulletins and collecting guides were published by the Ministry of Supply and Kew in order to help with identification and storage. Unfortunately, it seems as though the records of the Berkshire Herb Committee do not survive. 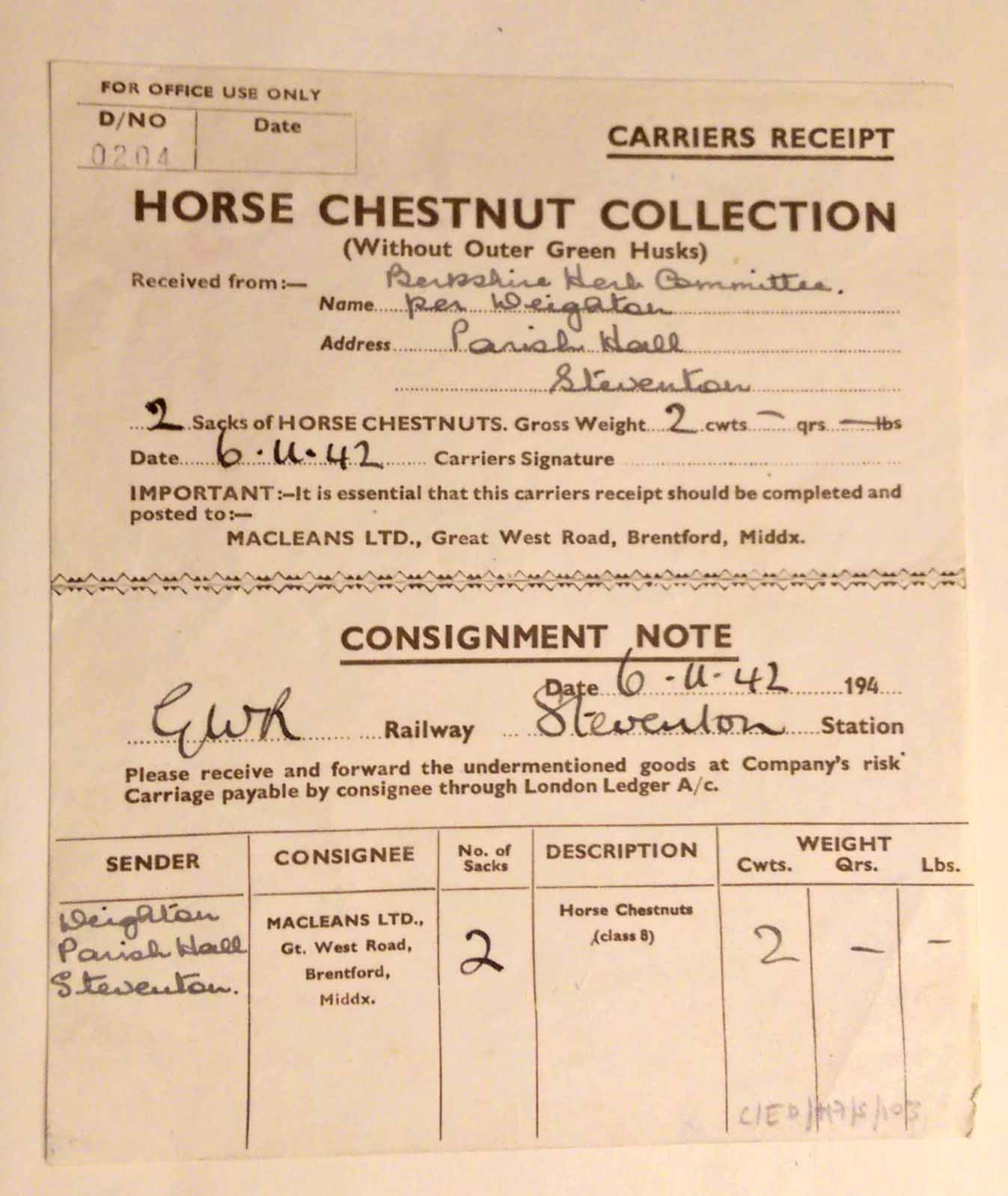 The carriers receipt shown here indicates that the conkers were to be sent to Macleans Ltd. who is known for the manufacture of toothpaste - not chestnuts. The minutes of a meeting held 24 March 1942 under the Directorate of Medical Supplies, reveals that Macleans paid suppliers and received the conkers to extract Glucoside and Aesculin from them (records held at the Archives of the Royal Botanic Gardens, Kew ref. 1/MUS/28). This was to be used by dairy bacteriologists for laboratory identification of several bacterial species. According to the Directorate of Medical Supplies, Ministry of Supply, Herb Collectors’ Bulletin, No.6, September 1942 it could also be used for animal feed: “A glucose preparation will be made from the Chestnuts… It is hoped that the residual pulp will be used as a feeding stuff for animals.” (Kew ref. 1/MUS/28 ).

So the conkers collected by the children at Steventon through the Berkshire Herb Committee were not used for toothpaste or munitions, but for keeping the nation’s milk supply and dairy herds healthy. It’s amazing what curious things can be discovered amongst the archives.