Progress Theatre was founded in 1946 and is situated off Christchurch Road in the Mount, Reading. It is an amateur theatre, but has staged innovative plays and even the likes of Kenneth Branagh spent a period of time there as a student member. In 1968, the theatre did something quite extraordinary. It attempted a world record for reading the whole works of Shakespeare without stopping. By doing something quite difficult and unusual, they hoped to succeed in raising money in order to rebuild their theatre which at the time was just described as a simple 'hut'.

A large number of actors were involved including Dame Judi Dench, who was apparently starring in 'Cabaret' in the West End at the time. Here we see a letter of invitation to a prospective participant, an actor called Robert Hardy, detailing the need for funds and a new building (ref. D/EX1151/10/4/3): 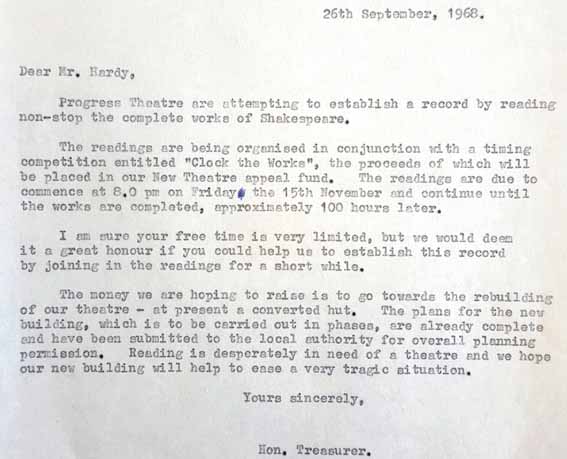 We discover that John Somerville was set to read from all 37 plays in the attempt. The cutting below refers to the fact that he even took a camp bed along in order to catch a few hours sleep in between readings (ref. D/EX1151/17/17). That's dedication to the cause for you!

The event took place on 15th Nov 1968 and the record they had to beat was 100 hours. They actually did it in 89 hrs, 24 mins and 13 secs and achieved the World Record they had hoped for. Sadly though, they did not raise much money from the event as this report by Ted Frewin in a Progress Theatre newsletter from 6th December highlights (ref. D/EX1151/11/1/2):

Mr Frewin stated that “The profit in terms of hard cash was not staggering – about £100". However, he goes on to say "but the publicity, bonhomie and the new friendships we made, more than compensated for this”. So whilst the vital funds required to build the new theatre had not been realised, those involved not only became world record holders - an amazing feat in its own right - they raised the profile of the theatre whilst doing so.

Progress Theatre's building has had many alterations and extensions made to it over the years and can now sit 96. You can find our more about the theatre on its website: Progress Theatre.