This month’s highlight gives you an insight into the Edwardian approach to alcoholism and addiction. When Jimmy Taylor – Jimmy the Nib – was found drunk in the street in December 1906, the Abingdon magistrates gave him one day’s imprisonment and ordered him declared as a ‘habitual drunkard’ (ref. PS/FT26/24/5). Under the terms of the Licensing Act 1902, the Berkshire Police were informed of his new status and to better protect the public they had this poster made up to send round the local publicans and licensees.

A street seller when he could find work, Jimmy’s nickname was ironic, ‘Nib’ meaning a gentleman. After the magistrates’ order, if Gentleman Jim tried to buy alcohol he would be fined: 20 shillings for the first offence and 40 shillings for each occasion thereafter. If anyone was found serving him, they could be fined up to £20 themselves. It was an economic incentive to stay sober coupled with a public condemnation. 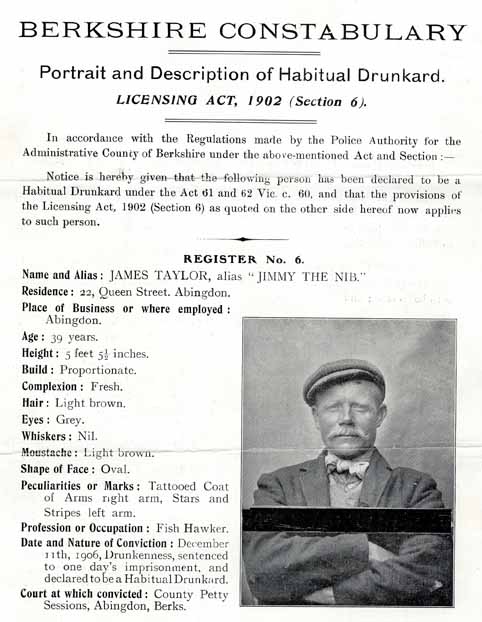 The naming and shaming of habitual drunkards was the latest tactic in the long-running political war against excessive drinking. At the time, it was seen as a cheap option to try and influence behaviour. It was introduced as an alternative to the recently created ‘Inebriate Reformatories’ where addicts would be effectively imprisoned for up to three years while they were forced to go sober. Perhaps it is did have the desired effect on Jimmy, as according to the family, he ended up serving his country for four years in France during World War One.

Unsurprisingly, the expense of that plan had meant that few reformatories were ever built. However, it was not long before naming and shaming had also fallen as flat as a dodgy pint: the small number of these posters in our collections is testament to that. Few orders were made, and the effect of them was minimal. Alcoholics began to be seen more as sufferers from mental illness than as criminals, and by the time of the First World War there was a movement away from punishment towards treatment.