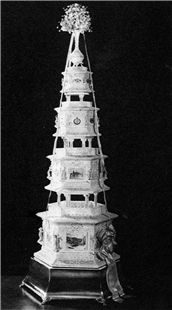 This photograph is of a replica of the cake that Huntley and Palmers of Reading made for the marriage of the then Princess Elizabeth to Lieutenant Philip Mountbatten, on 20 November 1947.

The cake was made from a traditional Huntley and Palmers wedding cake recipe. It had six sides, and side number two is on display in the photograph. This has the crest of Australia on the top tier, the Women's Auxiliary Territorial Service badge on the second tier, an image of Princess Elizabeth taking the salute as Colonel-in-Chief of the Grenadier Guards on the third tier, and a view of Buckingham Palace on the bottom. These adornments were made of sugar, and then hand painted. The front of the cake, with a bow on the bottom tier, can be seen on the right hand side.

Elizabeth and Philip began to write to each other after a meeting in Dartmouth in 1939, when the future Queen was only thirteen years old. Their engagement was announced shortly after the Queen's twenty-first birthday.

Their marriage ceremony took place in Westminster Abbey, and was broadcast on radio around the world to an estimated 200 million listeners.