This month our highlight celebrates the 900th anniversary of the founding of Reading Abbey by King Henry I in 1121. Although the abbey’s own archive was scattered following the Dissolution in 1536, the BRO holds a number of documents relating to the abbey showing its overwhelming influence over the town.

Many of these documents come from the archive of the Corporation of Reading, the forerunner of Reading Borough Council. In the middle ages the Corporation frequently came into conflict with the abbey over matters such as control of trade, and these battles were often fought in court.

The particular document shown below, is the borough’s copy of the award by official arbitrators of the last major dispute in 1525 (ref. R/AL1). Unusually for legal documents of this date, it is written in English. From left to right you can see three seals validating the document: the seal and signature of Thomas Englefield; a seal with impression missing; and the seal of the borough with the five heads visible. The wavy edge at the top is a sign that it was a ‘chirograph’, a document written in duplicate or triplicate; with the other copy kept by the abbey. The abbot at the time was Hugh Faringdon, the last head of the abbey, who lost his life in 1536 for his defence of the abbey against Henry VIII’s Dissolution. 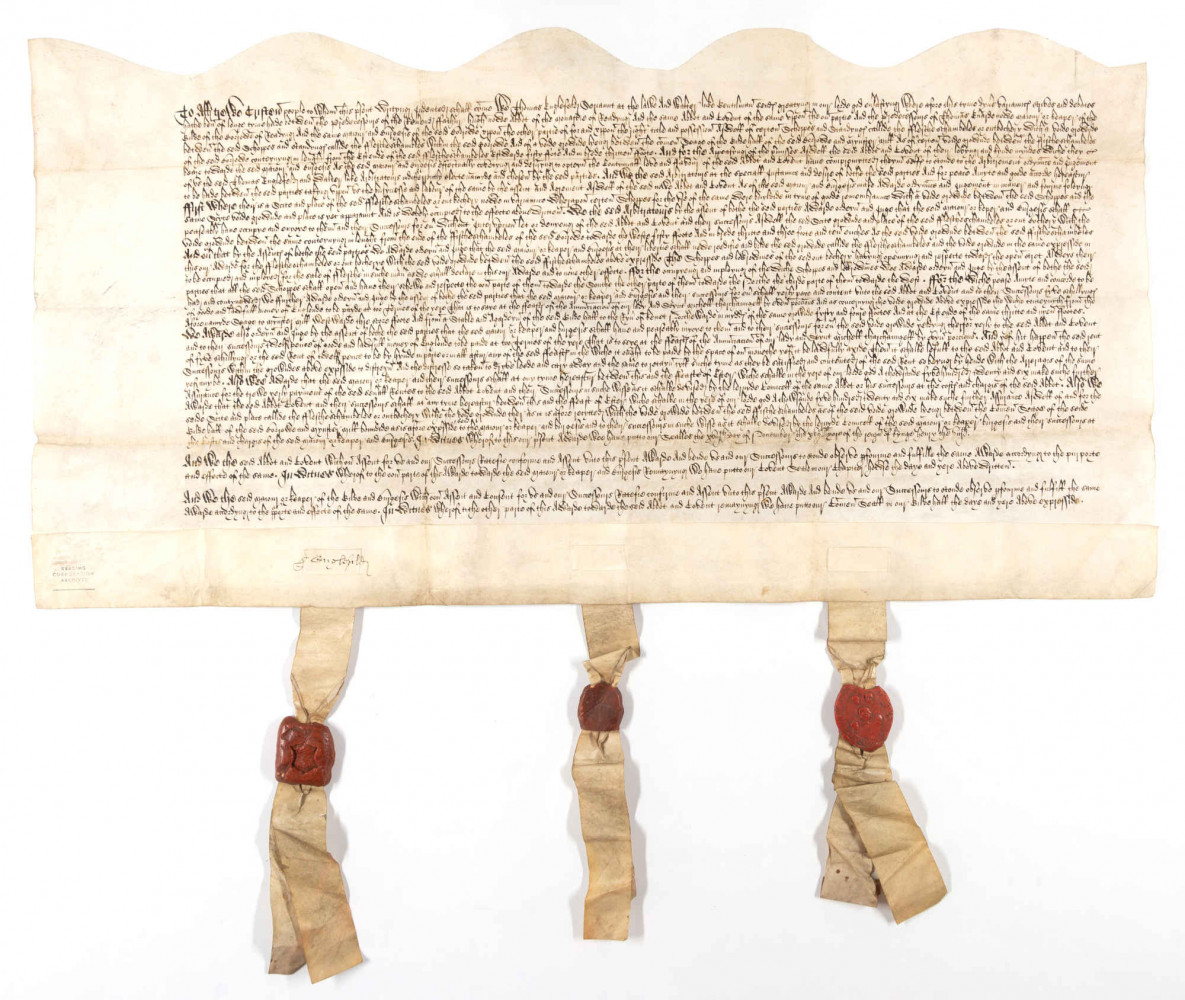 The argument was a long-standing one over control of the town’s butchers’ shops and 'standyngs' (market stalls) called the Flesh Shambles or Out-butchery. By this agreement, the mayor and burgesses were to rebuild the premises and pay 5 shillings a year as rent to the abbot. It was decreed that they should peaceably occupy the premises without interruption or denial by the abbot and convent.

The stalls and slaughtering place were situated in the middle of the lower end of Broad Street (near Market Place). The New Shambles built after this, comprised a more conventional row of small butchers’ shops known as Butcher Row, with an identical row of fishmongers (Fisher Row) backing on to them, and with the town’s Woolhall, where woven cloth was weighed, on an upper floor. Additional temporary stalls were put up on market days for butchers from outside the town until at least 1633. The buildings stood until the 1850s when Broad Street attained its modern layout.

You can discover more about the Reading Abbey related documents that we hold on our new Reading Abbey web pages. We've also written the July 2021 issue of our newsletter, The Berkshire Echo, on the subject so look out for it when it becomes available online.