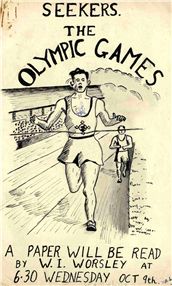 The Seekers was a club for older boys of Reading School. It was originally founded as the Reading Literary Society in 1916, but became known as the Seekers from 1919. The club held regular meetings where boys were selected to deliver a paper on a specific subject. In October 1946, it was the turn of W.I. Worsley who had to provide a paper on the subject of the upcoming Olympic Games in London in 1948 - the first to be held since 1936.

The image on the left is a 'front cover' to Worsley's paper (ref. SCH3/18/61/7) and he begins by providing a historical background to the games. Worsley did not think that Great Britain did very well in the 1936 Olympics and he provides suggestions as to how their prospects could be improved for 1948. He states that if athletes were well cared for and given the best training facilities, they could do very well.

He goes on to say that "it is necessary to spend much more time and money on our Olympic representatives or we can give up any hopes of being anything out of the ordinary in future". And suggests that "special extra rations [are required] for at present it is obviously impossible for an athlete in serious training to have only as much food as an old lady of 75".

He goes on to support this theory of better rations resulting in wins by passing comment on the fact that Britain was up against "a country which had almost as much food as it wanted, during the war. The American tennis team easily secured the trophies at the 1946 Wimbledon championships".

The opinionated school boy also provides his view on how to improve the games overall. One being "to have them spread over the period of four years and to hold them in different countries so that it would be possible to see everything". The other was more contentious as he suggests that women be removed from the Olympics altogether as having them compete is akin to a circus act:

"Having women in shorts slinging around 16lb weights does not seem right and to me appears to come too near to the bearded woman circus sensation".

It is not known if others shared this opinion, but thankfully attitudes today are more positive and the Olympics provides a platform for both men and women to compete equally in many different sports.