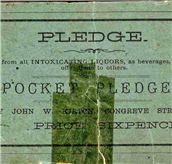 Many people consider abstaining from alcohol in January as part of 'Dry January' either to raise money for charity or simply to compensate for the excesses of Christmas and New Year. Few would abstain for life though, but that is just what those who followed the Temperance movement in the nineteenth century did.

This image shows the pocket pledge book of the Newbury Temperance Committee (ref. D/EX2492/5/1). This committee was officially formed in 1904 as an umbrella body for local, mostly religious, organisations with an interest in temperance. A copy deed indicates that the Newbury Temperance Hall on Northcroft Lane, Newbury, was certainly in existence in 1875. The Hall still stands today, but is now used as an arts centre.

The word temperance can mean moderation or self-restraint in an action, especially from alcohol, or complete abstinence. The latter is what the Temperance movement promoted and it is believed to have originated from Joseph Lively of Preston who pledged to abstain from all liquors of intoxication and not to provide it for anyone else as early as 1832. Previously there had been a move to restrain oneself from having too much liquor, but this new pledge meant abstaining altogether for life.

The pledge book kept a record of those who took the pledge to abstain from alcohol and provided the 'pledgee' with a certificate. Here we see a slip from 25th February 1891 for H E Ilsley, who was a servant on Hermitage Farm.

There is still an element of the temperance movement in religious circles today, though perhaps not as strong as it was in the nineteenth century. Certainly abstaining from alcohol is not necessarily done by most people for religious reasons today, and is not usually done for life - unless of course it is to prevent alcohol addiction. Whatever the reason, being a little 'temperance like' and abstaining from alcohol even for a short time is probably a good thing for anyone's health.