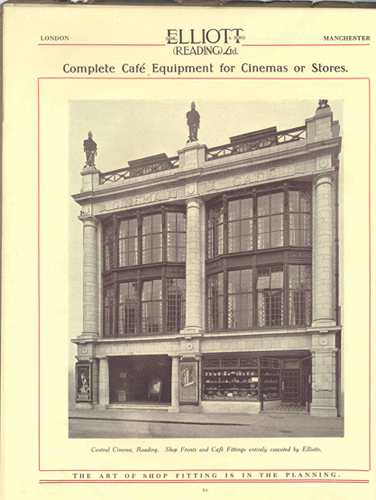 This photograph comes from the archive of Samuel Elliott and Company - an archive that is likely to become a regular contributor to these pages. It shows what was the Central Cinema Playhouse and Cafe in Friar Street, Reading, often known as the ABC Cinema.

The Central was built just after World War One, part of the national growth of local cinemas that took place between the wars. Elliott's, a local joinery firm, had supplied the wood fittings for the Central's interior and used the job as an example of what it could do in one of its promotional brochures.

The Central never remained the same for long. It joined the ABC (Associated British Cinemas) national chain in the 1930s, and its cafe side was wound down after the war. ABC itself was taken over by EMI in 1967, and then sold first to Cannon and then Pathe. When Odeon cinemas bought the remnants of the chain in 1999, it closed a number of old ABC outlets.

The Central Cinema was one. The building was sold in 2002 and subsequently demolished.