The Foundlings of Newbury

As the pages are turned in this parish register for Newbury St Nicolas, 1746-1783 (D/P89/1/4), it is striking and saddening to see the long lists of burial entries for infants “from the Hospetel of Exposed & Decerted yong Children”. This intriguing institutional name refers to The Foundling Hospital in London. Each child is listed alongside their hospital registration number with no other details provided about how they came to be buried in Newbury. Yet these entries hint at the stories of so many of London’s foundlings that spent their first and final years in Berkshire. 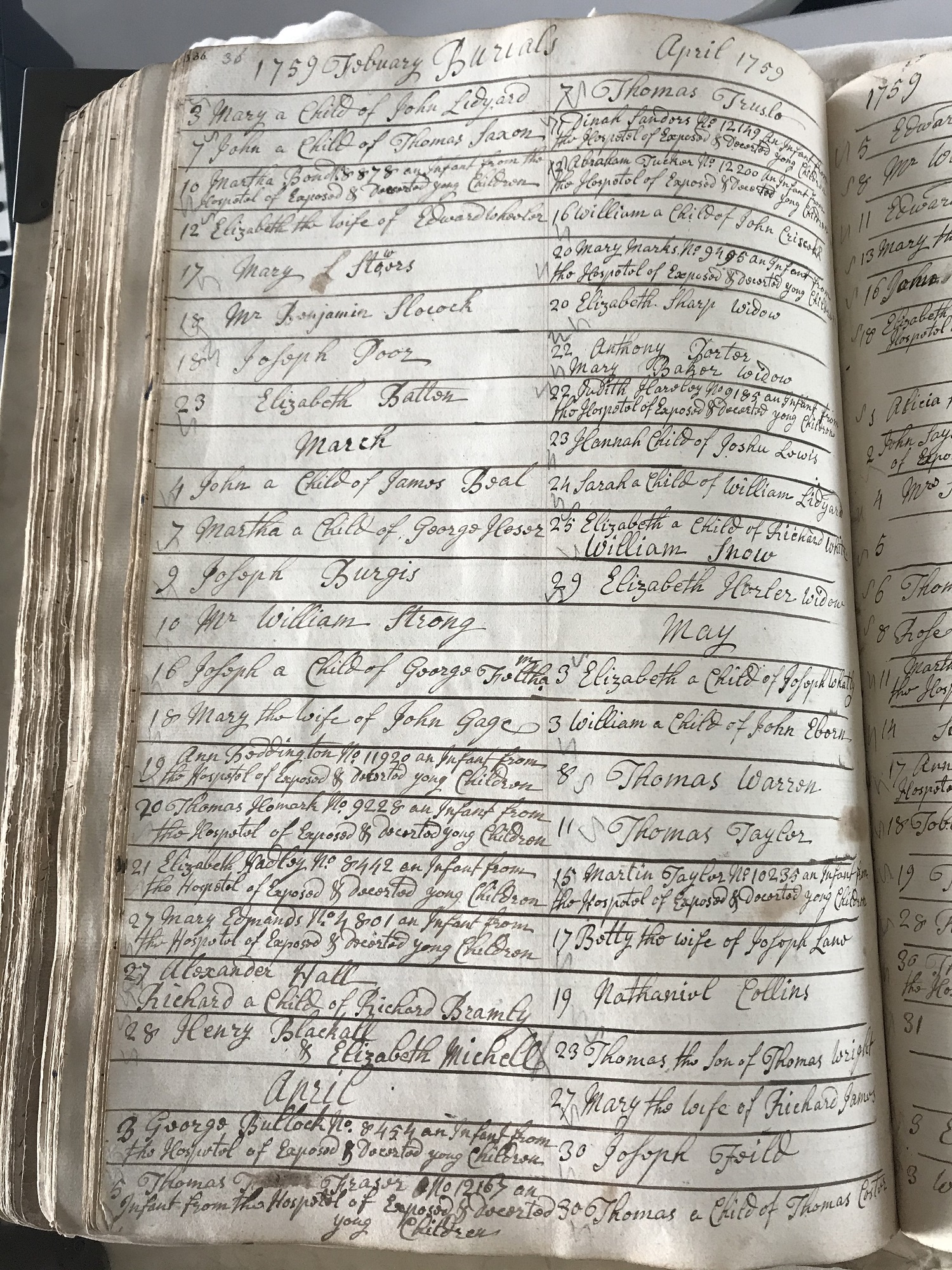 The Foundling Hospital was established in 1739 by Philanthropist Thomas Coram for babies at risk of abandonment. Parents were able to leave the children in the care of the governors with no questions asked. It may have been that the children were orphaned, in poor health, or that they could not be cared for by their parents. For some this was due to financial reasons and in other cases the birth may have been a secret if it occurred outside of wedlock.

The charity was supported by nearly 400 non-executive governors who used their connections to recruit voluntary inspectors to supervise and support a network of wet nurses that the children could be placed with across the country. Once the children reached the age of five years old, they were then sent back to London and in most cases placed into apprenticeships. In total, around 1,400 foundling children came to Berkshire, mostly between 1756 and 1760.

The babies, aged six months or less, were placed with wet nurses located within easy reach of the inspectors that were responsible for them. There were two inspectors in Newbury, Dr John Collet and Mrs Hannah Aldworth. Nearby, there was also Naomi Southby of Winterbourne (sister of Hannah Aldworth) and John Cates of Donnington.

Hannah Aldworth was the daughter of Samuel Slocock, a wealthy Newbury brewer, who was known locally for her benevolence and philanthropy. When she died, she left £800 to parish almshouses, and her portrait was then hung in St Nicolas Church, where so many of the Foundling Hospital children had been laid to rest. This can be viewed online here.

Dr John Collet was the leader of the West Berkshire inspectors and he wrote extensively to the hospital to request more resources and report the progress of each child. Dr Collet gained a reputation as a reliable and responsible inspector, which resulted in a large proportion of children being sent to Newbury under his supervision. During the peak, Dr Collet was responsible for over 100 children in addition to managing his own medical practice.

Sadly, the death rate of the children was high due to their poor health, possibly worsened by the effects of poverty. Many of the deaths were caused by bacterial infections, measles, smallpox and whooping cough. It is also thought that in some cases children were placed with the hospital when they were on the brink of death as the parents were unable to afford the funeral costs.

The Foundling Hospital records, including inspectors’ correspondence, are now held at London Metropolitan Archives (LMA). However, the Berkshire Record Society transcribed and published the letters of the Berkshire inspectors in Correspondence of the Foundling Hospital Inspectors in Berkshire, 1757-68 (1994) edited by Gillian Clark, which is available in our reference library.

The inspectors’ letters provide us with a wealth of context about many of the children listed in the burial register. On 24 January 1759 there is a burial entry recorded for “Rachel Exeter No 4007 an infant from the Hospetel of Exposed & Decerted yong Children”. As was commonplace for parish registers at this time, no additional information is recorded. But with the correspondence we can locate a letter from Dr Collet which reads, “this is to acquaint you of the death of Rachel Exeter, No 4007, who died Jan 23rd of a violent fever and was buried the next day. The fever was on her but 3 days but was very violent and affected her breath and was, I believe, a peripneumonia” (LMA reference: A/FH/A/6/1/12/3/51). This detailed information about the cause of death is a rarity for researchers and family historians examining burials during this time period. 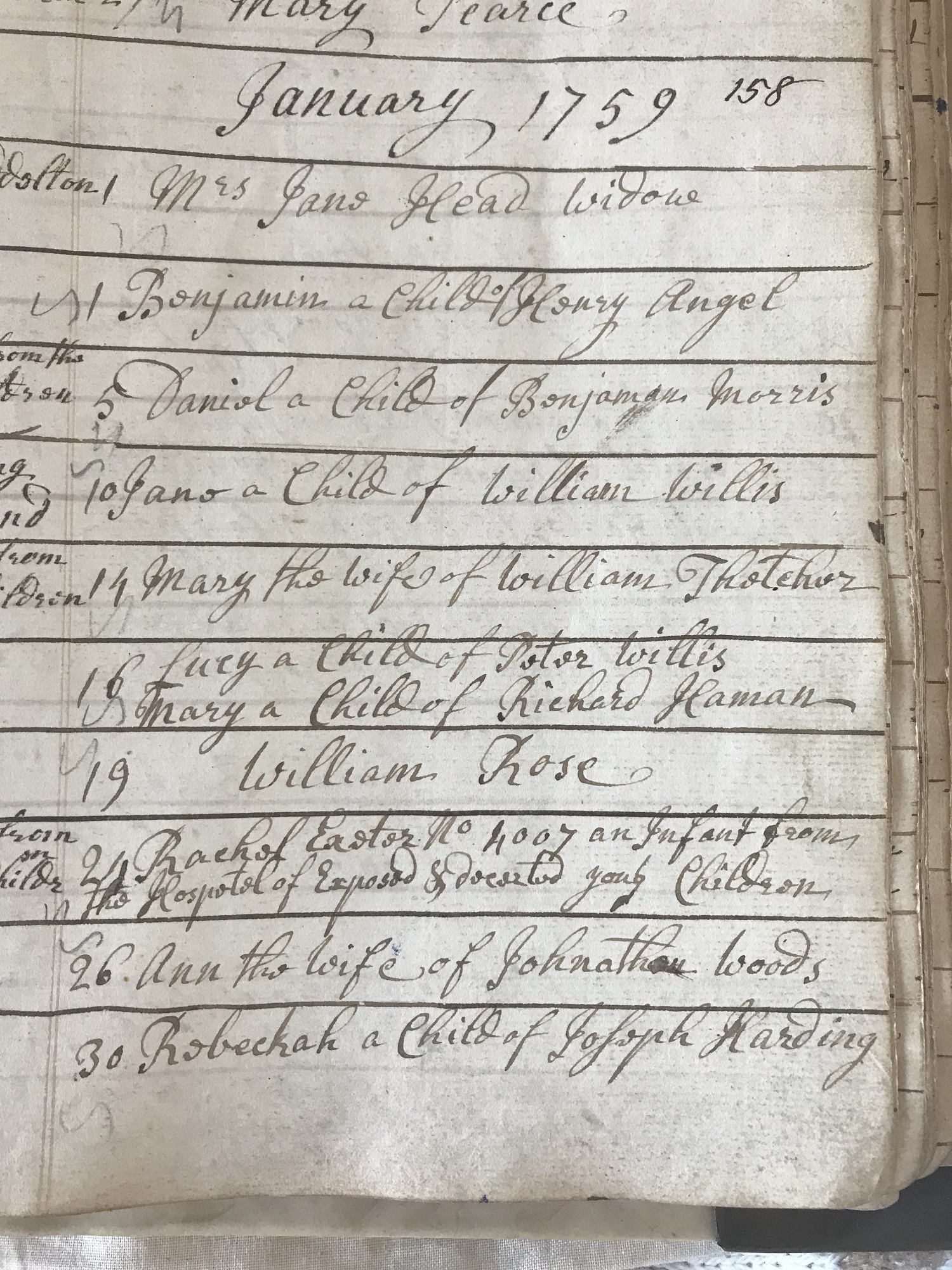 The entries can be even more easily identified using the Berkshire Family History Society CD index to the St Nicolas parish registers which is a newly released resource now available in our searchroom. There is also a map of the distribution of wet nurses and inspectors within the parishes of Berkshire in An Historical Atlas of Berkshire (1998) edited by Joan Dils.

The Foundling Hospital continues today as the children’s charity Coram. The Coram Foundation was recently awarded funding to digitise the Foundling Hospital records, so it will soon be even easier to trace the stories of the foundlings in Berkshire. Information about this project can be found here.