Berkshire Sprinters of the 1970s

The 2022 World Athletic Championships and Commonwealth Games start this month. Medals will be won, and records may be broken. However, all great athletes have to start somewhere and a record in the archives reveals the promising beginnings of some of Great Britain’s female stars of the 1970s and 1980s. 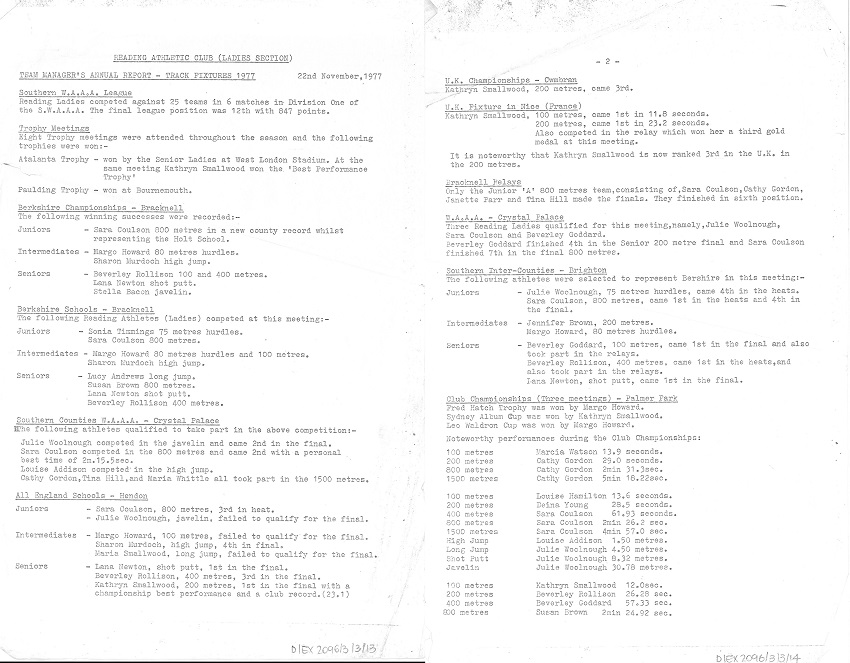 The Annual Report for Reading Athletic Club’s Ladies Section for 1977 (ref. D/EX2096/3/13-14) lists many results for the year. The name Kathryn Smallwood appears multiple times achieving good results. At the All England Schools competition in Hendon, she finished first in the 200m ‘with a championship best performance and a club record (23.1)’. At the UK Championships in Cwmbran, she came third in the 200m whilst at a U.K. fixture in Nice, France, she came first in the 100m, 200m and as part of the relay.

This Kathryn Smallwood had joined Reading Athletic Club in 1971. As a tall 14-year-old she had shown promise as a high-jumper but asked to join the relay team. As they already had a strong 4x100m relay team, she was offered a chance to try out in the 200m as a non-scorer. She raced round in 27.1 seconds and secured herself a place in the next relay.

Did the coaches realise what a talent they had on their hands? By 1977 the team manager noted that ‘Kathryn Smallwood is now ranked third in the U.K. in the 200 metres’. This ranking would continue to rise and she secured selection for the 1978 Commonwealth Games. She finished fifth in the 200m and ran the second leg on the 4x100m relay where she received the baton from a familiar face...

Halfway down the second page of the annual report, another name appears as having qualified for major events. Only three women from Reading Athletic Club qualified for the 1977 Women’s Amateur Athletic Association Championship (the foremost domestic athletic competition) held at Crystal Palace. One of these was Beverly Goddard who finished fourth in the 200m. She also won the 100m at the Southern-Inter Counties competition held in Brighton and the 400m at the Club Championships.

Her season had been limited in 1977 due to a muscle injury, however, she also secured selection for the 1978 Commonwealth Games and beat her teammate in the 200m final where she finished fourth. However, she and Kathy Smallwood would team up to form the first two legs in the 4x100m relay final. Great Britain had not won gold since 1958 with Australia having won in the previous five Games. Led off by these two Reading Athletic Club members, the quartet, completed by Sharon Colyear and Sonia Lannaman, won in convincing style 5 metres clear of second place Canada.

Three of this quartet (including Smallwood and Goddard) would team up again four years later to win in Brisbane. In between, at the 1980 Olympic Games, they won bronze in the 4x100m relay final. A feat which was repeated in 1984 when Goddard and Smallwood (by then competing under their married names of Callendar and Cook) were joined by a third member of Reading Athletic Club, Simmone Jacobs.

This was a golden time for female British sprinting. Between 1978-1984 British or English 4x100m relay teams won medals at every Olympic, World, European and Commonwealth competition, with Callendar and Cook being a member of every team. Kathy Cook set individual national records for the 100m, 200m and 400m which have only been beaten in the past 14 years. Two greats of British sprinting, yet their early success can be traced back to Reading Athletic Club and seen in records held here at the BRO.