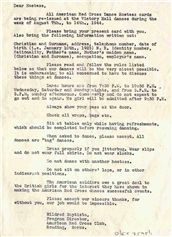 73 years ago, Mildred Baptista, the programme director of the American Red Cross Club in Reading, set up a programme of dances for US servicemen. It took place between 7th and 14th August 1944 at the Victory Hall and girls were invited to attend as hostesses. This basically meant that they were to dance with the soldiers by way of providing some light relief in an otherwise stressful and unpleasant time of war.

A circular letter amongst the archives at the BRO (ref. D/EX2595/1) provides details of what was expected of hostesses. In order to be given a hostess card, girls had to provide details of their name, address, telephone number, date of birth, N. R. (believed to stand for National Registration) Identity number, nationality, Father's name, Mother's maiden name, occupation and employer's address. Quite a lot of information just for a dance!

Dancing may sound like simple fun, but Mildred set out a series of rules which were to be read before the dance because "it is embarrassing to all concerned to have to discuss these things at dances". And the rules were pretty strict as we see from the image below.

It is not known if sitting "on others' laps or in indiscreet positions" had occurred at previous dances, but presumably it either had or was just someone's assumption of how young ladies dressed and behaved at dances.

The letter also refers to only sitting at tables if having refreshments and that no girl would be admitted after 9.30pm. It all seems very harsh, but standards were important even if the country was at war. Mildred does state that the "American soldiers owe a great deal to the British girls for the interest they have shown in making the American Red Cross dances successful events". She goes on to offer the girls "sincere thanks, for without you, our job would be impossible". So despite the strictness of the rules, appreciation was given where it was due. Hopefully it was fun for all involved, from the US servicemen to the properly dressed girls.