It's an inflated world 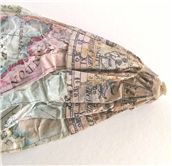 Amongst the Stevens family of Bradfield collection is an inflatable globe (ref. D/ESV(B)/Z5). The globe was made by George Pocock in c.1836. Pocock was born in Hungerford and was a teacher in Bristol. He was also the leader of the Tent Methodists in Bristol and is known for his invention of the ‘charvolant’ – a kite powered buggy no less. However, he was also keen to provide teaching aids for schools - one of which was the inflatable globe.

The globe (shown flat in these images as due to its fragile condition, it cannot be inflated) was made with printed strips that were glued together and fixed at the top with a type of button. It seems to have a fine fabric attaching the paper to the button. This can just be seen in the image shown top left which also shows that the top has the signs of the zodiac on.

Some of the country names were written on as well as being printed. We can see a ring at the bottom which is probably made with wood. This is where air would have been 'inserted' in order to inflate the globe. This may have been done with bellows or perhaps merely by swirling the globe around in order to 'catch' the air.

The intricacy of the map is quite something and it is amazing to find this in the collections. It is amongst the miscellaneous records of the Stevens collection as it does not clearly fit in with the rest of the records. How the family got hold of it we do not know, perhaps they simply bought one for the use of their own children.

One can just imagine what the nineteenth century children felt when they got to see the globe in its full glory with their teacher pointing out places around world. The sad thing is that most of the children would probably never have seen such places in real life, but at least they got to learn of their existence.