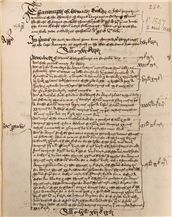 October 2017 sees the 500th anniversary of the Reformation when the German monk, Martin Luther, wrote his '95 Theses' protesting against the practice of indulgence in the Catholic Church. The resulting call for purity spread across Europe and played into the hands of Henry VIII who wanted the Pope to annul his marriage to Catherine of Aragon in order to marry Anne Boleyn; but the Pope had refused.

In 1534 England split away from Rome through the Act of Supremacy making Henry VIII Head of the Church of England. The dissolution of the monasteries followed and Henry took away their wealth in the process.

The Reading St Laurence churchwardens accounts (ref. D/P97/5/2) for the period reveal how the parish tried to conform to the new regime. Altars, papal images and references had to be removed and bibles translated into English. This was on top of all the normal running and maintenance costs that a parish had to contend with. The cost of obeying orders was high. Therefore the parish had to sell off it's valuable plate (e.g. silverware) in order to meet these costs. Below we see a reference from 1534 to some 'kandlestikes' (candlesticks) being sold:

Here we find a reference in 1547-8 to Nicholas Bull, a Goldsmith from London, having bought a great deal of plate for a large sum of money - over £30: ![](/storage/app/media/copy/dp97-5-2-Nicholas-bull-plate.jpg) Below is a reference to the taking down of images; another sign that the parish was trying to comply with the new religious order:

Accounts are often thought of as mundane or even boring, but the Reading St Laurence churchwardens accounts provide real insight into the impact of one of the most important events in English history. It may not have started in England in 1517 as it had in Germany, but the Reformation ultimately changed the course of religion in England forever.