Back in 2018 we were given a print of an engraving entitled 'The South Prospect of Reading', by S and N Buck, dated 1734 (D/EX2701/1). This is a view of the town as seen from Katesgrove (here called 'Catsgrove') Hill, and offers a delightful perspective of the town in the early Georgian era. You can see the three parish churches, the abbey ruins, and the River Kennet (with sailing barges), with distant views of Caversham and Mapledurham and the River Thames. A brief historical account of the town is printed below the picture.  Several gentlemen and one lady are shown walking on the hill, and men are digging, possibly for oyster shells, which are mentioned in the detailed caption as being found within Katesgrove Hill, in a level 5 or 6 inches thick, ‘many of them large & entire, others decay’d & Mouldring [sic]’. 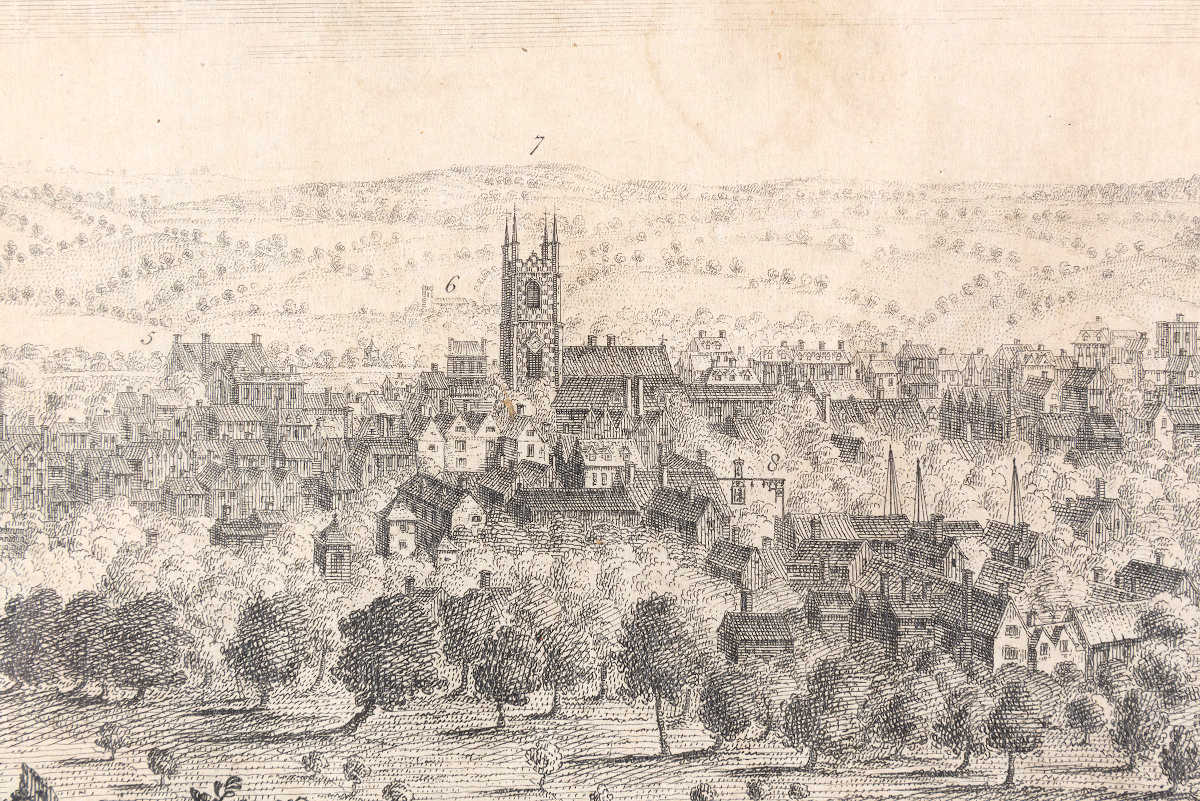 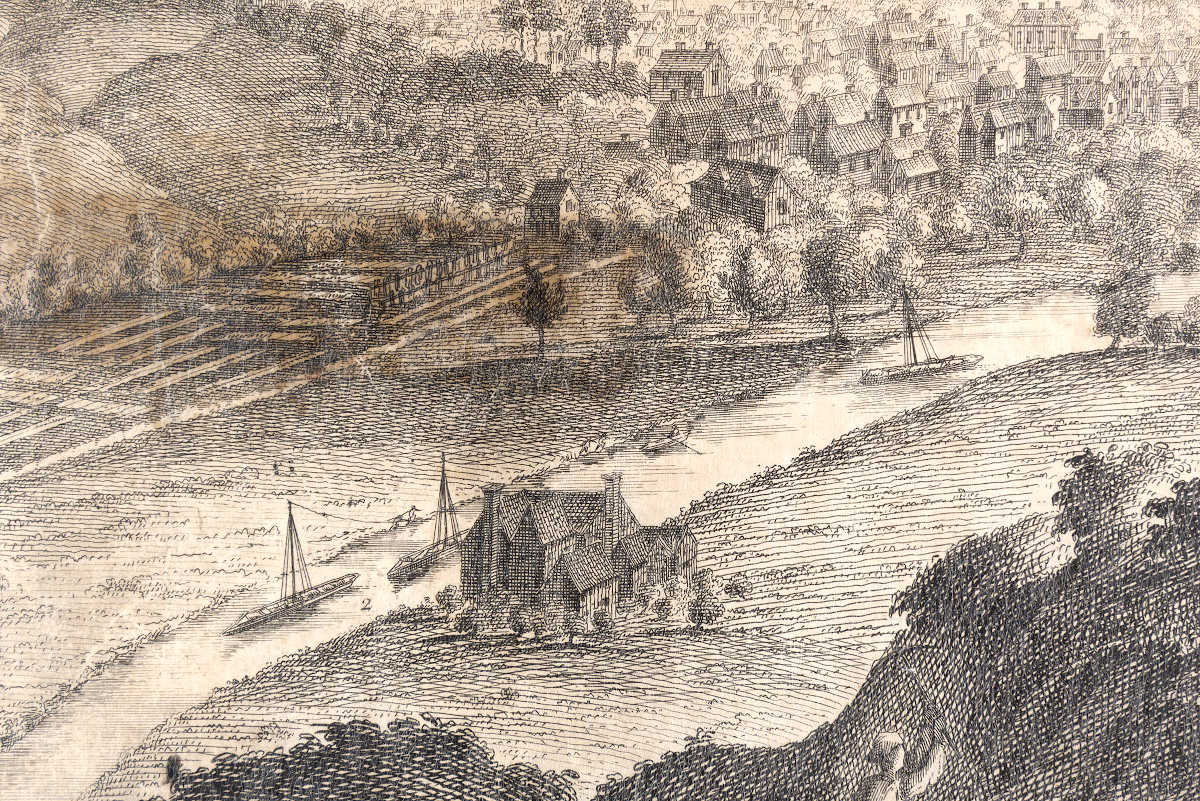 Samuel Buck (1696-1779) and Nathaniel Buck (fl.1724-1759) were brothers who worked together as engravers and printmakers. Originally from Yorkshire, they settled in London but travelled widely around the country every summer to make their detailed drawings of scenic views and antiquities.  In the winter, they turned them into copperplate engravings, from which prints were made on paper. Their work was massively popular in its day, and today the British Library calls the brothers "the nationwide 'topographers par excellence’ of the mid-18th century". You can see what the brothers looked like via an online portrait on the British Library website. 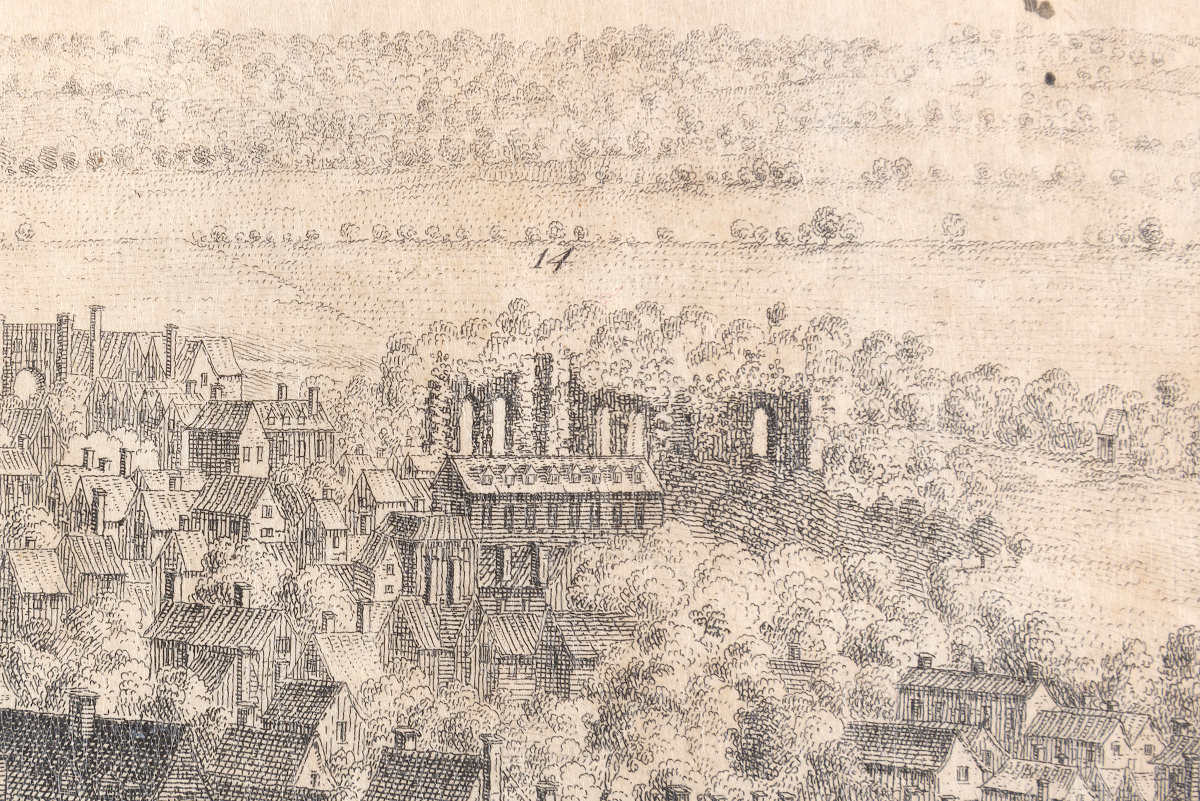 Sadly, their art did not bring lasting wealth, and Samuel’s old age was spent in poverty. This particular engraving was originally produced for their series of townscapes, Cities, Sea-Ports and Capital Towns. You can view some of their other drawings online. Later on, the prints were sold individually with copies perhaps found in local homes. So while not unique, it is a delightful view of 18th century Reading.

Unfortunately, the print was so fragile when it arrived we had to class it as ‘Not to be produced’. The paper was brittle and badly torn and discoloured.

On the left side, there were large tears and a small piece was missing. There was also a very hard to ignore dark yellowish thin rectangular mark - the distinctive mark left behind after sticky tape (aka “Sellotape”) is removed. 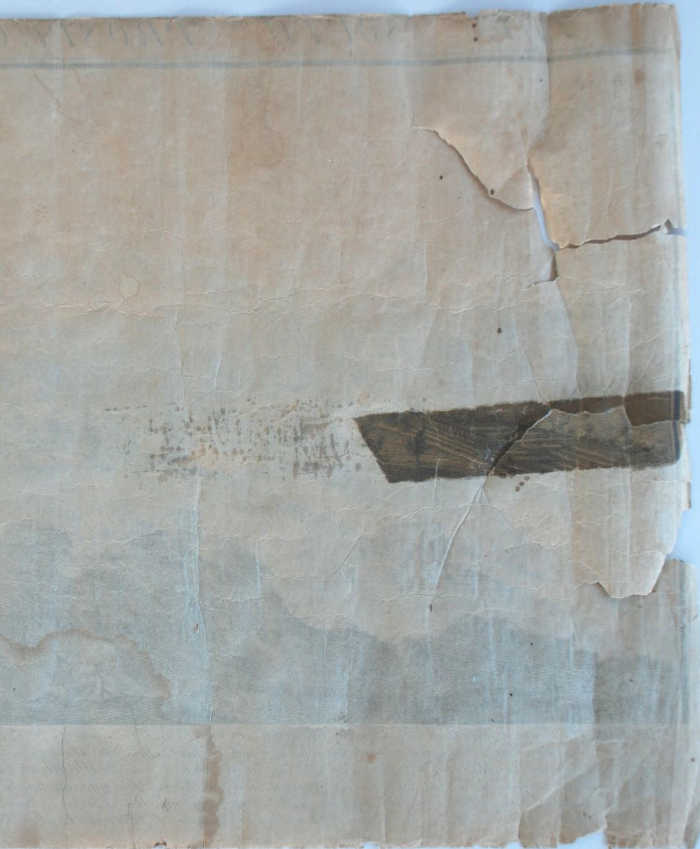 To repair the damage, conservation washed the print to reduce the stains and discolouration. Please don’t try this at home yourself though! We do pre-treatment tests before carrying out any treatments and have the expertise to carry out repairs.

We rarely use solvents in our treatments and Acetone is normally the solvent of choice to minimize the prominent sticky tape stain on the left hand side of the print, but it had little effect in this instance. As we have another copy of this print in the collection (D/EX2807/37/20), this was a good opportunity to try using a stronger solvent called Tetrahydrofuran. The fume cabinet was turned on for ventilation whilst using the solvents, and all the personal protective equipment was used. Safety first!

Once the cleaning was complete, the print was supported on the front with a sheer Japanese tissue, and on the back with an opaque Japanese paper. The small missing area was replaced with a compatible wove paper. The overall result can be seen in these photos. The yellow discolouration and stains are reduced in all areas; revealing the finer details of the print and making it easier to appreciate the landmarks of Reading, and more importantly, the print is now stable and can be safely handled. It now looks better than the other version we have.

The fantastic work of our conservation staff means that the once fragile and not to be produced print can be seen and handled now and by the generations to come. If you would like to visit to see the print yourself, it would be best to book to use the map table as it is a long landscape image, 32 inches wide. Please see our Planning a Visit Page for details on how to book.