A Life on Benefits 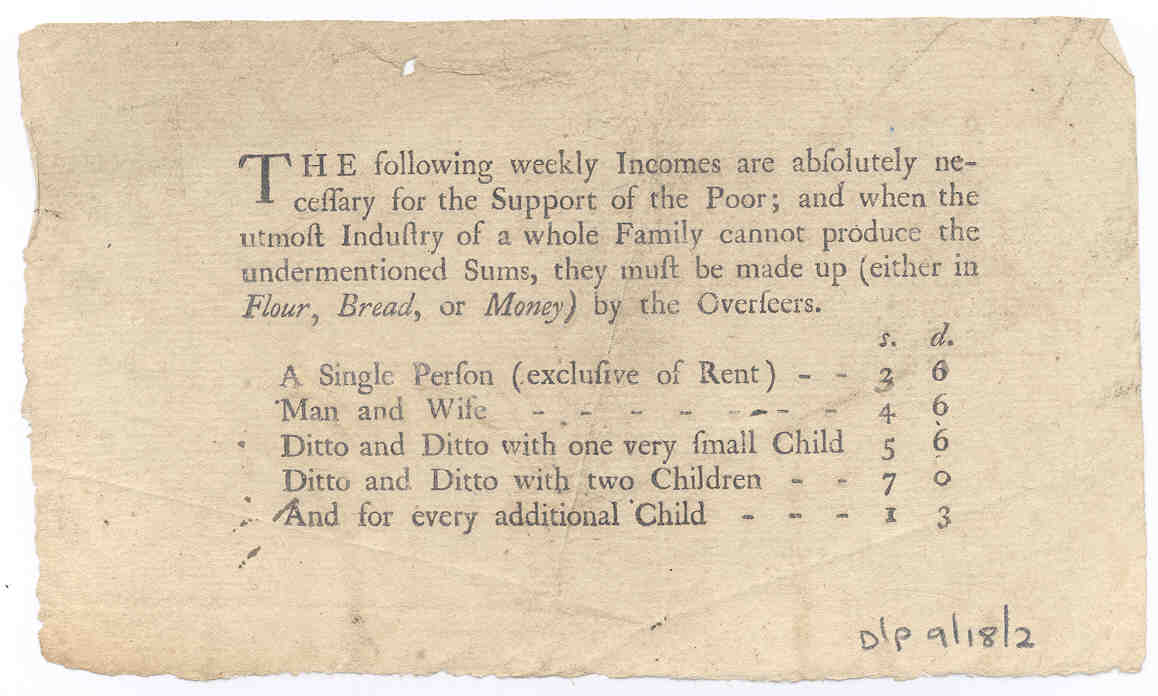 One of the drawbacks of working in archives is that the news seldom surprises you.  Many events and topics merely repeat themselves over the centuries, and modern media echoes opinions that we can read about in times past.

The debate about payment of benefits to the poor is one such topic, so we thought it might be interesting to show you how benefits were fixed - and their relation to a living wage - some two hundred years ago.

This little paper does just that.  It shows how the parish of Ashbury determined its welfare benefits at the start of the 19th century. Undoubtedly such printed sheets were found in many other parishes, but they seldom survive.  Our fortune is that the Ashbury overseers – the parish officials responsible for dealing with the parish poor – decided to keep this one for their reference purposes.

The scale of benefits itself manages to be very prescriptive but also very vague. Payment in kind could be given instead of money; children might be considered to be ''very small' - though the nature of this calculation in terms of age, height, or weight is not stated. Perhaps the most striking thing is the absolute instruction for payment: that these benefits must be paid if a family’s own hard work could not provide a living wage.

Of course, like now, somebody had to pay for this assistance. Two hundred years ago, that duty fell upon the parish payers of the poor rate, a much-resented local tax. The overseers had a duty not just to help the poor, but also to keep the rates low. And within the Ashbury parish archive there is evidence of this financial management in practice.

For the parish had only a duty to look after its own. As a result, between the 1780s and the 1830s the overseers forcibly removed some 57 paupers with no legal right to remain in Ashbury; roughly one person or family every year. In a time and place of much movement in agricultural labour, such removals were common: during the same period, Ashbury was forced to accept some 43 paupers returned to them by other parishes. Nevertheless, a net loss of 14 paupers was probably seen to be good business by the Ashbury rate payers.

By 1834, this parish system of poor relief was over, considered to be too expensive. The workhouses came instead. The overseers of Ashbury continued to collect the poor rates, but they no longer had responsibility for paying benefits. The poor went elsewhere for their help, and this little piece of paper passed into history.