An Irishman in Reading, Reluctantly 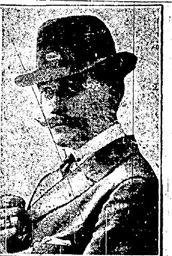 On Easter Monday 1916, Dublin was occupied by armed rebels calling for an Irish Republic.

Meanwhile, on an island just off the County Mayo mainland, Darrell Figgis was sat at his writing desk. A couple of weeks later, on 11 May 1916, Figgis was arrested. A picture of him is shown here with thanks to the Irish Newspaper Archives and the Irish Independent, 26 May 1916.

Although Figgis was not actively involved in what is now known as the ‘Easter Rising’, he did help to ship guns from Germany to Ireland. This rebellious act led to Figgis being convicted under the Defence of the Realm Act 1914 and taken to Castlebar Jail in County Mayo. After stints in various English jails, Figgis, along with other Irish rebels, arrived at Reading Prison on 10 July 1916. The prison had recently been reclassified as a ‘Place of Internment’, and held foreign nationals – or ‘Aliens’ – suspected of spying.

Officers at Reading Prison were in for a shock. Unlike the run-of-the-mill criminals, these newly-interned Irishmen were educated and articulate. They took particular issue with the food. The Prison Inspector’s minutes reveal that the Irish internees objected to ‘having pease soup twice a week & pease pudding once a week’ (P/RP1/12/1). Figgis was one of the complainants. Through studying the law, Figgis succeeded in arguing for improvements in prison conditions, including a later ‘lights out’ time, an increased allowance of letters from home, and higher wages for prisoners.

Figgis and the other Irish internees were released from Reading on Christmas Eve 1916.