The Worst Journey in the World

Following on from our Dickens document, this month’s highlight relates to another well-known anniversary being commemorated this year: that of Scott of the Antarctic.

March 2012 sees the passing of one hundred years since Scott perished with his companions Bowers, Evans, Oates and Wilson on their return from the South Pole. It was a tragic end to what had been a significant expedition.  This letter was written by one of the men who was part of that expedition: Apsley Cherry-Garrard.

Cherry-Garrard was the heir to Berkshire estates in Denford and Little Wittenham, and had grown up in the county. He was also a scientist with an interest in the coldest parts of our planet.  His particular interest was to observe and understand the Emperor Penguins, and his time in the Antarctic allowed him an opportunity to do so. Like the rest of what was principally a scientific party he was also seduced by the idea of reaching the South Pole, and owed his exclusion from Scott's select band to the fact that other men were considered fitter than him.

This letter, written in October 1911, arrived at the London offices of Farrer and Co in May 1912 (ref. (D/HER/Z6/202).  It had travelled on board the Terra Nova, Scott's relief ship.  At the time it arrived, Farrer and Co had no idea whether Cherry-Garrard was alive or dead.

The letter paints a picture of both the excitement of exploration and also some of the problems which would haunt Scott’s expedition. Cherry-Garrard writes that ‘we lost 6 ponies, 3 of which died from exhaustion very largely caused by the blizzards’, yet also ‘I don't suppose there has been in the whole world a more happy and contented community during the last year’.

Cherry-Garrard was a member of the team who found Scott's last resting place and retrieved the journals and photographs that have inspired so much interest in the expedition.  He returned to England in 1912 and went on both to fight in the First World War and to write a bestselling account of his time with Scott entitled ‘The Worst Journey in the World’. He died in 1956 at the age of seventy-three. 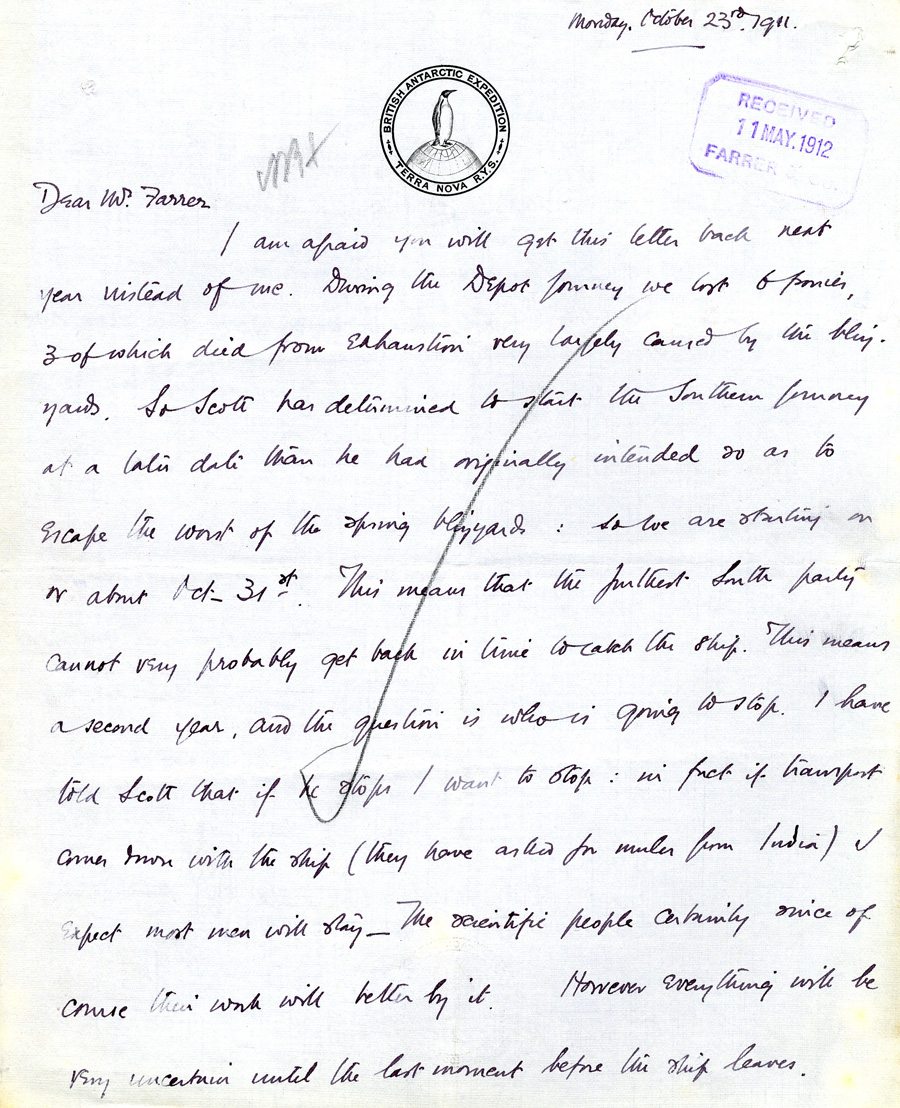