Here’s something from the very first London Olympics, which took place in 1908.

The marathon at that year’s Games has passed into legend, and it all started in Berkshire. Setting off from Windsor Castle, the runners crossed the river to Slough and Langley before meandering through Middlesex for a finish at the White City Stadium.

The race itself was run in searing heat. With two miles to go an Italian runner, Dorando Pietri, took a commanding lead over his nearest rival, the American Johnny Hayes. By the time he approached the Stadium itself, Pietri was over ten minutes ahead.

Then disaster struck: Pietri began to run round the Stadium track the wrong way. He was turned round, but collapsed and was helped back up by the race umpires. Clearly exhausted, Pietri fell over time and time again, until he was finally carried to the finish line to cheers from the spectators. A well-known image of this is shown above.

Unsurprisingly, the US lodged a complaint, Pietri was disqualified for outside assistance, and Hayes got the gold medal. Pietri, though, had won the hearts of the nation, and Queen Alexandra presented him with a lavish silver cup in recognition of his heroic achievement.

This month’s highlight is the programme that was on sale in Windsor on marathon day. The image details the athletes’ refreshments en route, and shows what Pietri must have consumed in his ultimately unsuccessful challenge. Stimulants were freely available, though any benefits from being a drugs cheat may have been outweighed if you took on too much rice pudding and raisins in one go. And that’s before you even got near your first Athletes Flask, full as it was of Oxo.

Regular readers of the monthly highlight will be aware of the hidden influence of Oxo on much of history. So it is that Pietri’s story becomes one that is also infused with the gentle flavour of this well-known stock cube. It provides a link, too, with the Games that we are about to experience. For Oxo was to the 1908 Olympics what so many brands are to the modern one: an official sponsor. 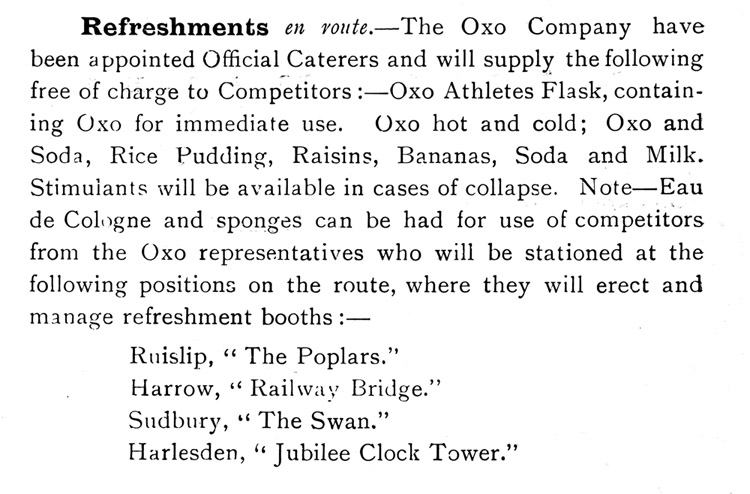