Fire from the Sky 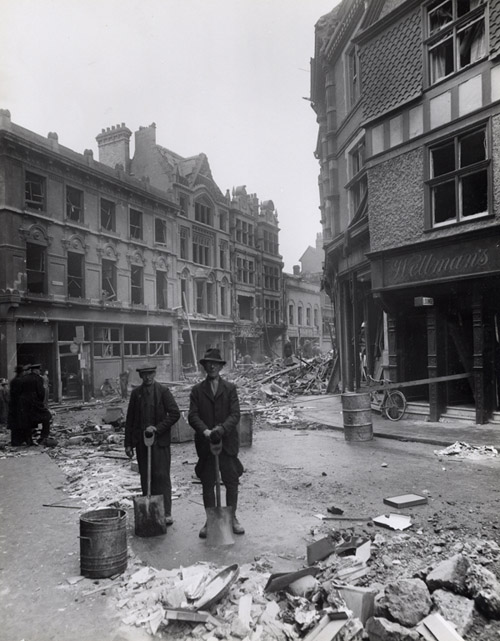 On Wednesday, 10 February 1943 Newbury and Reading both experienced their most significant bombing raid of World War 2.

Two Dornier 217 bombers followed the Great Western Railway line running west from London. At 4.34pm one bomber flew in over south Reading and eight minutes later the other arrived at Newbury. Both strafed the towns with machine gun fire as they dropped four 1000 lb bombs. The Newbury raider also dropped four smaller bombs.

The planes were probably aiming for the towns’ railway stations but missed their targets.

In Newbury, St John’s church, St Bartholomew’s almshouses and the council senior school were all destroyed. Fifteen people were killed: eleven women, three men and one boy. There had been no warning siren. The local civil defence commanders had to use the Police and Home Guard to keep back the crowds while there was an organised search for survivors.

The Newbury raid hit largely a residential area, with some 74 homes also destroyed or damaged beyond repair. In contrast, the Reading raid fell across the town centre, straddling what is now the site of the Oracle shopping centre and moving north to the Town Hall. There was greater loss of life: forty-one people died in Reading, despite an air raid warning. Thirty-five of them were dining in the People’s Pantry, a Government-sponsored restaurant behind the Market Place. The other casualties, including two children, were taking shelter as best they could.

Both bomber crews also became victims of war; their planes were brought down as they flew back towards the continent. 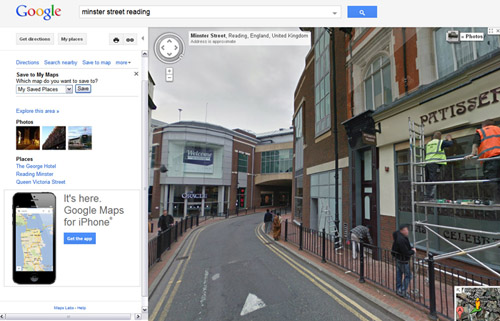 The photograph shown is of the damage around Wellstead’s department store in Reading’s Minster Street (ref. D/EX1657/3/6). A screen shot from google maps shows the site today. The photograph comes from Reading’s civil defence archive, and this and the similar Berkshire County Council archive contain various accounts of the raids.

The anniversary of the raids will be marked in both towns, which intend to unveil memorials to the civilian victims of the day.