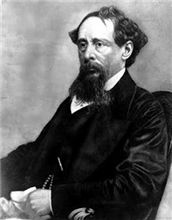 Tuesday, 7 February 2012 sees the 200th anniversary of the birth of Charles Dickens, and this year there will be a number of events to mark the occasion.

Dickens has long been celebrated as one of England’s greatest writers and his name is known across the globe. At the BRO, however, we know him by a different name: Charles Tringham. For this is the name that he gave to the parish officers of Upton-cum-Chalvey.

Tringham was the alias that Dickens used to rent a house in Slough for his mistress, Nelly Ternan. He went to great lengths to keep their identities hidden, destroying many personal papers relating to the affair and adopting false identities to conduct business relating to it. Yet although he carefully covered his tracks when he was alive, his secret is now available for anyone to see. This is because whatever else he could run from, Dickens could not escape the inevitability of paying his rates.

So between April 1866 and June 1867, ‘Mr Tringham’ appears in the rate books as the occupier of a house on Slough High Street, close to the railway station and the regular trains to London. It is documentary proof for a story previously told only by hearsay. One of the entries is reproduced here.

The house, next door to Butler’s drapers store, is long gone: reputedly burnt down in 1889. But the evidence of Dickens’s secret life in Slough remains, buried deep in a handful of Victorian rate books at the Berkshire Record Office.