Diary of an eighteenth century Lady 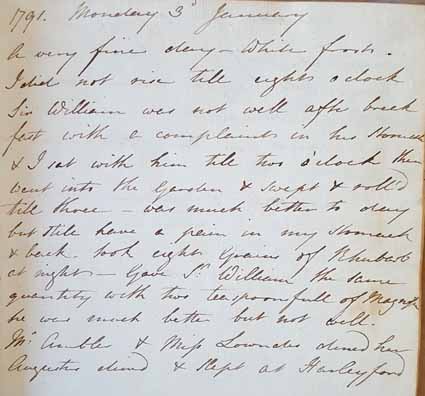 As we move into spring it is not uncommon to consider one's health and how it could be improved such as by eating better, getting fitter, perhaps even trying natural remedies to treat any afflictions. This may be considered to be a modern phenomenon - even an obsession, but it would seem that even those in the eighteenth century were health conscious as the diary of Lady East from 1791-1792 shows (ref. D/EX1306/1).

The diary provides an insight into the daily life of an eighteenth century woman who, being a Lady, was most likely wealthy. But it is also quite revealing in its detail of her own health and that of her husband, Sir William East. Sir William was the 1st Baronet of Hall Place, Hurley and he was also the High Sheriff of Berkshire. Hall Place remained in the family until the 1930s and is now the Berkshire College of Agriculture.

In the image above Lady East complains of stomach pains and how she took rhubarb at night to ease them. The diary also refers to the fact that Sir William was often out and about, presumably in the course of his responsibilities as well as for pleasure. The Easts would also receive visitors for tea or dinner, so entertaining played a large part in their lives.

Unfortunately, Sir William appears to have suffered from gout which must have been very painful as we see in this entry here where he wanted the doctor to give him Laudanum, an alcoholic solution containing morphine which was used as a painkiller.

The doctor did order some draughts, but also suggested he take other things such as 15 grams of prepared crabs claws, 20 grams of gum arabic and a tea spoonful of syrup of saffron. Some interesting remedies. 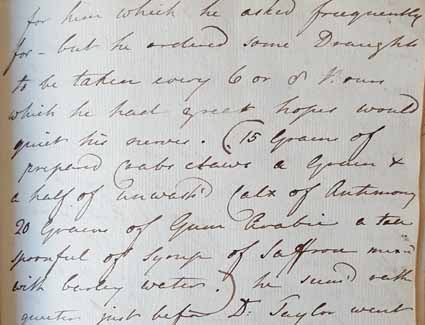 Details of Sir William's gout and how he suffered from pain, swollen joints and lack of sleep, fills the diary from April until the end of July 1791. Lady East even labelled the entries 'Gout' presumably as an aid to easily refer back to. As Sir William got better however, he visited his beehives more often and took an interest in exercising more. Here we see that he liked to use dumb bells.

Towards the end of the diary, Lady East begins to list what she ate for breakfast, lunch and dinner which gives us an idea of the types of food someone of her wealth and status would have eaten in the eighteenth century. There is a lot of meat from beef, to pork, veal, lamb, mutton, rabbit and pigeon. There seemed to be an abundance of eggs, and pudding was often rice pudding or jelly. Here we see an entry in 1792 showing rosemary tea, crust and butter for breakfast with roast beef and rice for dinner.

So it would seem that Lady East and Sir William ate well though possibly it was not the best diet for someone suffering from gout and there is not much reference to vegetables! Nevertheless, they seemed to be conscious of what they were eating and how much exercise they took. The diary provides an insight into how they wanted to keep fit and healthy as well as the use of natural remedies. Though perhaps the latter was because there were no alternative drugs as there are today. Overall, this document gives us a snapshot of the life of a Lady and her husband of importance, but also indicates how looking after and improving one's health is not necessarily the preserve of modern life.