On Tuesday 2 June 1953, the coronation of Queen Elizabeth II took place in Westminster Abbey. As befits the largest town in the Royal County, various celebrations took place in Reading to commemorate the occasion.

Quite understandably, the coronation was front page news on the Friday 5 June 1953 edition of the Reading Standard. Despite the actual event taking place in London, the Standard was quick to move their focus on to the people of Reading and their personal celebrations of the event. It lists that "there were processions and parades, carnivals and displays, sports and games, and hundreds of teas". The community-centric nature of these celebrations is emphasised as "Nobody was forgotten". Even for those who opted to stay in and watch the coronation on television, there was a sense of togetherness with "T.V. owners arranging whole-day parties for their friends and neighbours". 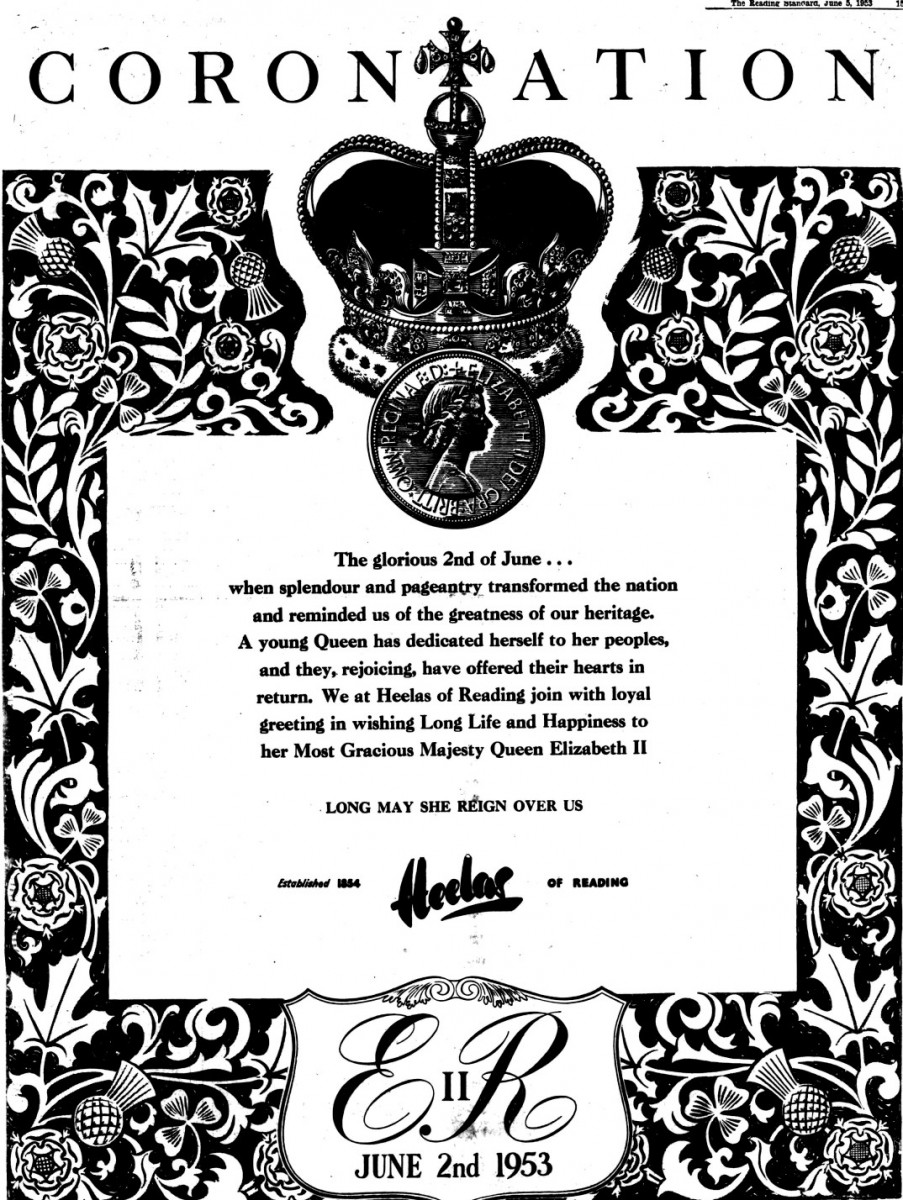 The Reading Standard reported on several streets in the town crowning their own ‘Coronation Queen’. Those who were noted included Maureen Emmett of Callington Road and Betty Turner of Sherwood Street. Despite the inclement weather on the day, the festivities pushed on. The planned party of 30 people on Park Grove required some ‘last minute improvisation’ as it was relocated to the inside of a garage in order to avoid the rain. The largest party was said to have taken place in the Cattle Market where a feast "was spread out among the pens". Although described as the biggest and noisiest of the gatherings, it seems to have been ‘a prelude only – to dancing, fun and games that were to be continued in the street throughout the evening.’

It has been well documented that the coronation was a significant moment for television broadcasting, and Reading was no exception to this. A number of television sets were set up in Reading town hall and "enabled more than 1,000 old age pensioners to join in the celebrations". Along with television sets, large screens were put in place to broadcast the event. The Reading Standard reported this as a great success, a sentiment shared by the Deputy Mayor, T. W. Knight, who praised the modern science that enabled the event to be shared in such a way. The Standard also writes that the popularity of watching the event on television led Reading to "have been almost a deserted town", but one that thankfully came alive in the evening when the celebrations started.

The older residents of Reading also enjoyed themselves at a party in the Forbury Gardens, despite the poor weather. The Standard writes that "together, two old age pensioners, Mrs. P. Lunn, aged 66, and Mrs. F. E. Mason, aged 60, danced every dance.". It was noted that some of the attendees of this party could remember four coronations taking place, "though they had to think hard to remember the names of the kings and queens"!

The celebrations were not just limited to the elders of the town however. There are numerous reports of communities and streets putting on coronation parties specifically for the children of the area. A combined effort by the Emmer Green Social Club and the Emmer Green branch of the British Legion managed to entertain 670 children with fancy dress, a bicycle parade, sports and tea. Many similar children’s celebrations also incorporated some element of fancy dress with parades or competitions taking place on Gosbrook Road, Foxhill Road and Grange Avenue among others. Several of these parties also provided souvenirs to their young attendees, often in the form of a coronation mug "filled with sweets, a bar of chocolate and an orange".

The coronation appeared to have been a much needed reason to celebrate and the people of Reading took full advantage of the opportunity. Mrs. F. M. Bennett gave a good summary of the popular feeling as she opened the Tilehurst I and IV Conservative women’s garden party, saying that "the Coronation had meant that for the first time since the war the country had risen above its differences into one tremendous united surge of opinion".

There is a wide range of different documents relating to the coronation held at the Berkshire Record Office. To see how other communities in Berkshire marked the occasion, you may be interested in the following:

You can take a look at the catalogue entries for these items on our online catalogue. If you would like to see these or any other items in our collections, please see our Planning a Visit page for details on how to book a visit.