Many people will try to save money by a spot of DIY rather than employing a tradesman for household repairs. Rather fewer build their whole house themselves, but a group of men in Windsor did just that in the 1950s, as revealed in a recently catalogued collection at BRO (D/EX2844).

The original suggestion of a ‘self-build group’ in Windsor actually came from the Borough Council, acutely aware of the housing shortage of post-war Britain. A Public Meeting was called at the Guildhall on 8 July 1952, and 17 men signed up to become a committee to explore the options. They reported back to another Public Meeting, at which 29 men were interested in joining. Members paid an initial non-refundable deposit of £1 to join. 17 paid up immediately. There was an ongoing subscription of 5 shillings a week to cover incidental expenses.

The plan was always to build 20 homes, so any members joining late were placed on a waiting list in case existing members dropped out. Building tradesmen would get priority from the waiting list. Members (or their wives) had to be either resident in Windsor for the past five years, employed in Windsor, or skilled tradesmen. Bricklayers, plasterers etc. were particularly sought after as members as they taught the other members the skills required at evening classes. Evening classes stated in September 1952, initially two nights a week at East Berkshire College of Education, costing participants 10 shillings a term.

A Training Hut was erected in 1953 on a site supplied by the Borough Council, and a Windsor College of Further Education brickmaking course was run there. By 1955 members included a joiner, two carpenters, two bricklayers, two electricians, a plumber, a plasterer, and a retired building foreman – a very useful group of men! Unskilled members included a clerk, a civil servant, an engineer, a bus driver, metal workers, maintenance fitters, and a BOAC engine fitter. Their average age was 35.

The Windsor Self-Build Housing Association followed in the footsteps of similar organisations in other parts of the country. It was registered under the Industrial and Provident Societies Act 1893 and was affiliated to the National Federation of Housing Societies.

Various potential sites were considered, including some outside Windsor (at Fifield and Oakley Green, Bray), but some were unsuitable for building and others too expensive. The houses were eventually built on two sites in Dedworth, Windsor, 12 in Longmead and 8 in Smith's Lane. 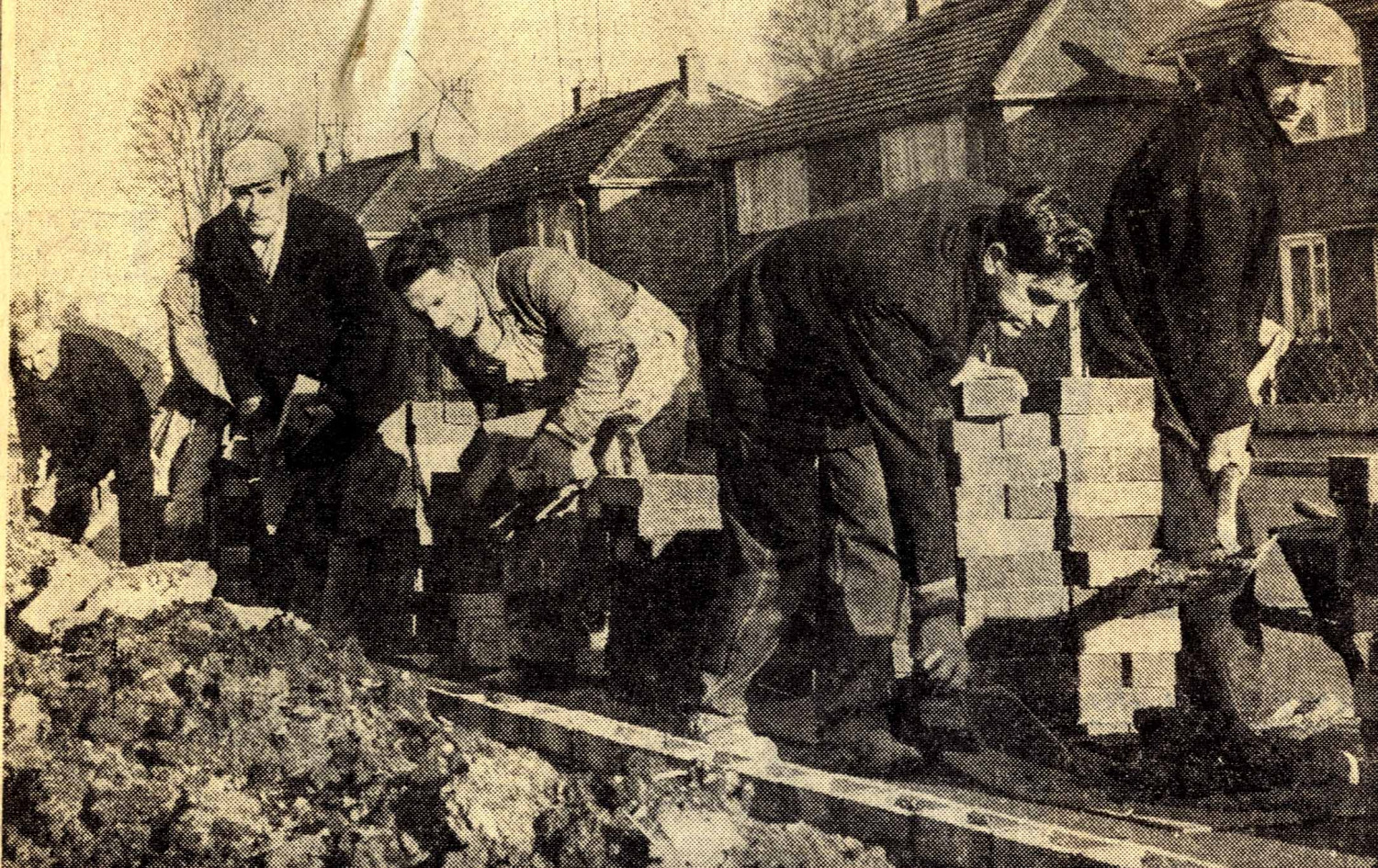 Work began on the first house in 1955, and the last was completed in 1958. They were mostly built to a standard semi-bungalow design, chosen to allow for members' inexperience, and had three bedrooms each. Asbestos was used.

The major costs (for the purchase of the land, building materials, etc), were funded by loans including some from the council, eventually taking the form of mortgages for each home owner. The Association provided the tools and materials required, and members provided all the labour (a minimum 22 hours per week by each man in the summer, and 12 in the winter, on top of their full time jobs, with many working even longer). This saved up to half the cost of the finished home.

In the early days, some became impatient at the slow pace of the project, or found homes elsewhere, and dropped out, while those who did not take part in training classes or attend meetings, or, later do their share of the actual building work, were expelled. They were not entitled to a house or any reimbursement – this included Mr R E Walker, the Association’s first Secretary who had been promised the first house to be completed as a special thankyou for his hard work. In fact, by the time building work started in 1955, only 6 of the founder members were still involved.

Houses were pre-allocated to members, initially by ballot of existing members, with those members joining later from the waiting list being added to the bottom of the list for houses. Occupation was conditional on the member carrying out his share of the work on the other houses for up to two years. Garages were built for each house at the end of the project. 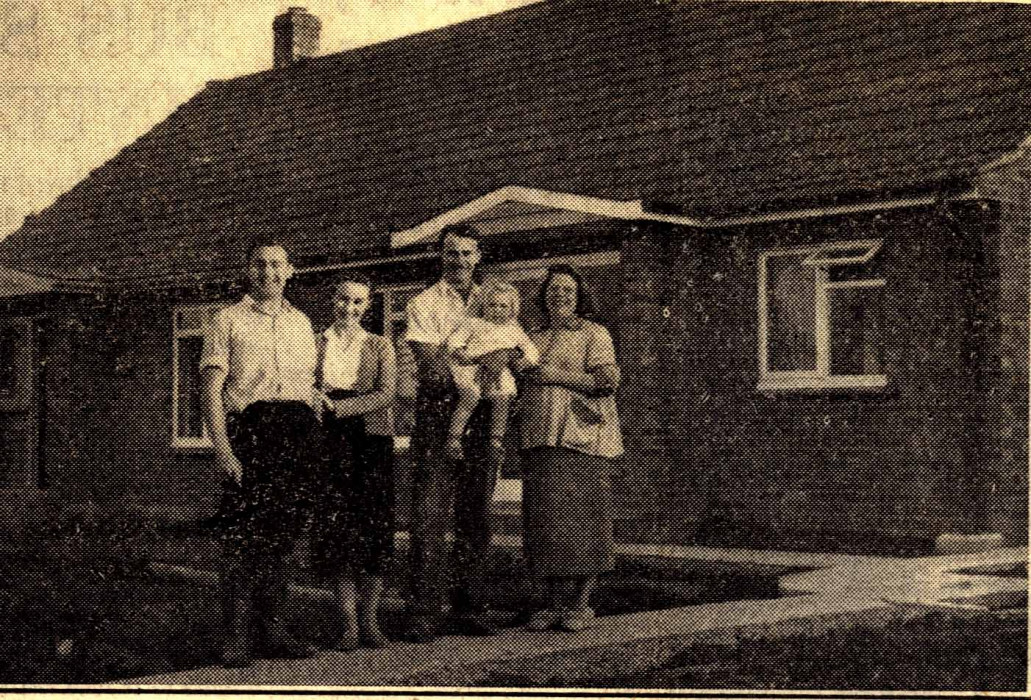 The first families to move in, on 27 September 1956, were John and Esmee Rogers, and William Collerton with his pregnant wife and baby girl. The Rogers had been living with Esmee’s parents (a challenging start to their married life), and the Collertons were cramped in a caravan, while the houses were being built. At last, all the sacrifices of their free time and hard work had proved worthwhile. 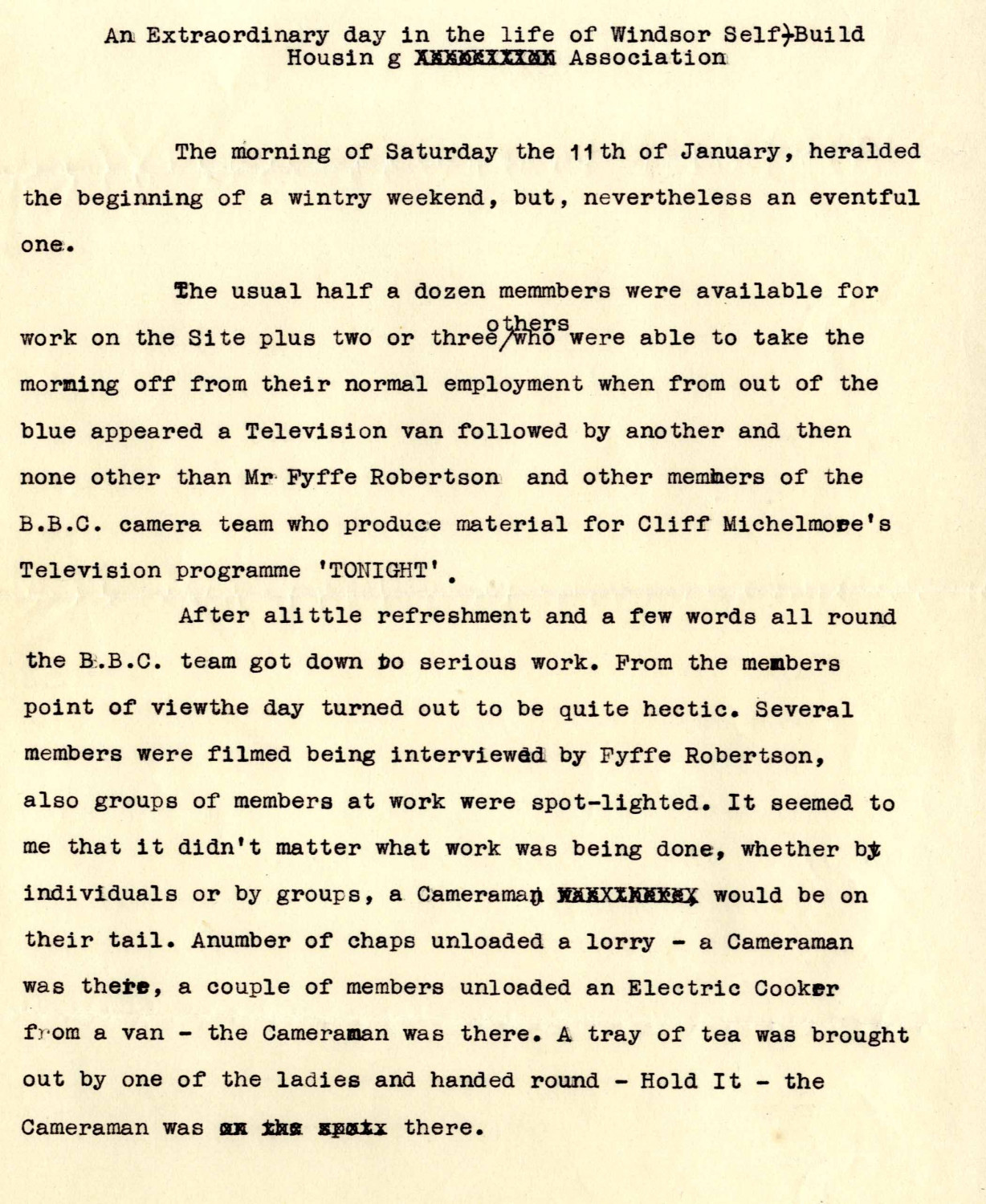 The project was the subject of an episode of the BBC programme Tonight, presented by Cliff Michelmore, in 1958. British Pathe produced a short newsreel for cinemas in 1959 entitled '20 Men Build Own Homes' a copy of which can be viewed online on Youtube. The film shows the furnished interior of one of the houses, and the handover of the last house to be completed to Mr and Mrs Young.

The Association was formally wound up in 1967. It had enabled 20 families to find their forever homes at a significant discount on the going rate.