A mill was on the site on the River Lambourn since Saxon times. The current building, known to West Berkshire drama fans as the Watermill Theatre, is probably late 17th century in date, although it has been altered over the years. Driven by a water wheel, at various dates it was a corn mill, grinding local farmers’ wheat into flour for bread; a ‘tucking’ or fulling mill for cleaning and thickening cloth as part of the manufacturing process; and by 1824 it was a paper mill, manufacturing paper from cloth rags. The BRO was lucky enough to acquire the plan shown in 2019 as part of a collection which includes a series of leases and related records going back to 1702, when it was known as the New Mills.

This remarkable plan (ref. D/EZ198/1/2/2) shows the internal layout of the mill itself, including the machinery. You can clearly see the wheel in the main course of the river, on the left-hand side of the property, and on the right-hand side a set of rollers for drying out the finished paper. A drawing of the 1820 patent for a very similar apparatus can be seen online here. It seems likely that this is the machinery that was put in when the miller first started making paper there. The archive also contains a schedule of the fixtures in 1867, when it was known as the Wawanda Paper Mills; the plan is not dated but we believe is from around this period.

For over 300 years (1531 onwards) the mill belonged to the Dean and Canons of Westminster Abbey, who let it to a series of tenants. In 1870 the tenant gave up his interest to local landowner Head Pottinger Best (whose first and middle names reflect his ancestry), owner of Donnington Grove, now a hotel. The following year he also bought the lordship of the manor of Bagnor from the Dean and Canons. He continued to let the mill property to tenants who ran it as a business.

Having fallen into disuse, the mill was converted into a theatre in 1965, with further alterations since. The remains of the waterwheel can still be seen and you can find out more about it by visiting the Watermill website. 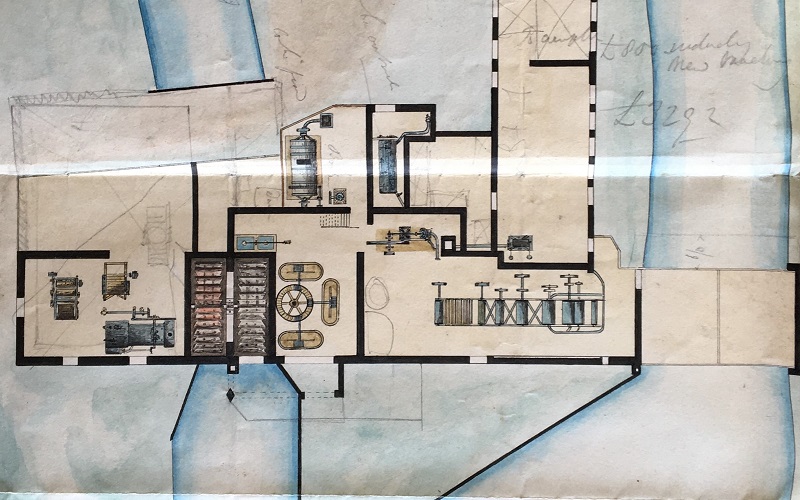