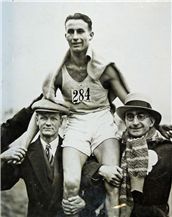 The second of our Olympic highlights again concentrates on long distance running, but this month we see how a local runner had his own moment of glory.

At the beginning of 1935, twenty-one year old mill worker Frank Close from Newbury, was a virtual unknown in the cross country world. However, during his first senior year he became the most talked about man in the sport. A member of Reading Athletic Club, he burst on to the racing scene by winning the Southern Counties Championships in his first ever ten mile race. He followed this by taking the national title two weeks later. He then competed in his first international race in Paris later that year and came fourth.

Life was hard for an athlete in the 1930s. In order to train for races during the day, Frank worked nights at the mill. Although Reading Athletic Club provided transport to major events, athletes would normally have to make their own way to events often cycling or running for miles before the race. At least Frank's coach ensured that he went to Newbury Rugby Club to receive treatment and massages from the club's physio.

Frank continued his success by gaining a place at the 1936 Berlin Olympics, competing in the 5000m race. Although he came second in his heat, he could only manage twelfth in the final. He continued to compete on the national stage after the Olympics, but did not experience the same level of success. His career probably came to an enforced end with the cessation of most athletic meetings during the Second World War.

The photograph shown is a shot of Frank celebrating his victory at the National Cross Country Championships at Beaconsfield in 1935 and is taken from a collection of records relating to Reading Athletic Club (catalogue reference D/EX 2117).