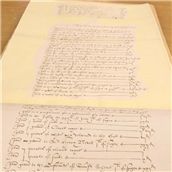 Theatre in the Elizabethan period was not the pleasurable experience we may think of today. Plays were performed in open areas such as the courtyard of an inn and had a reputation for trouble - presumably as a result of too much drinking at the inn! Local authorities were also wary of allowing performances to take place through fear of the spread of disease - the worst of course being the plague. Therefore a licence was required in order to allow groups of actors to perform in a controlled way and reduce their movements around the country.

Acting groups were known as troupes and companies. They would have had a patron, usually someone from the aristocracy. The earliest known acting group was the Earl of Leicester's Players which was granted a licence under Queen Elizabeth I. Such troupes had to provide their licence in order to play in towns and to get paid. This image from the Reading Cofferer's Accounts in 1587/88 (ref. R/FA/2/75) shows that the Reading Corporation made a payment to the Earl of Leicester's Players so they were definitely in Reading at the time.

The Elizabethan period also produced the actor, poet and playwright known as William Shakespeare, who wrote (his now infamous) plays. It has been suggested that he must have visited Windsor, presumably with his company of players, as one of his comedies, The Merry Wives of Windsor, refers to real life places such as the Garter Inn in Windsor.

Shakespeare was part of the acting company called the Lord Chamberlain's Men. This later became known as the King's Men and given royal patronage when James I came to the throne in 1603. As the Reading Corporation Diary of 1628-37 reveals (ref. R/AC1/1/3) there is evidence that the troupe visited Reading even after Shakespeare's death in 1616:

The entry from 1629 shows that Joseph Moore, Alexander Forster, Robert Guilman and John Townsend were 'servants to his majesty' with the rest of their company who were licensed to play and that they wanted to play at Reading Town Hall.

Other records of the period at the BRO can also provide an insight into what life was like in the Elizabethan period, though it is fascinating to discover that information about touring theatre groups is contained in seemingly ordinary accounts and minutes.

If you would like to read more about Shakespeare in Berkshire, please see our newsletter, The Berkshire Echo (Number 67), from 2014.