Send me back to prison! 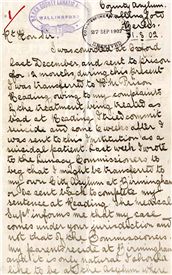 Edwin Price had been sent to Moulsford Asylum following an attempted suicide at Reading Prison in June 1902. Amongst a couple of recently discovered missing case books of the asylum, renamed Fair Mile Hospital in 1948, were some letters by Edwin to his parents and the Visiting Committee (ref. D/EX181/3). He was not a happy patient.

Edwin writes to the authorities asking to be removed from the asylum and sent to Birmingham where his family resided, or at least to be sent back to Reading Prison. He did not appreciate the way he was treated pointing out differences in his treatment with other patients. In this example, he asks why some patients were allowed to go into Cholsey, but not all.

He was convinced that the authorities were preventing him from leaving.

In his letters to his parents he complains about not hearing from them and goes as far as to say that he believes the authorities were withholding letters from him.

Edwin's letters show how determined he was to prove that he should not be in the asylum. They cover July to September 1902 and he was discharged as recovered in October the same year, which was not actually that long after being admitted.