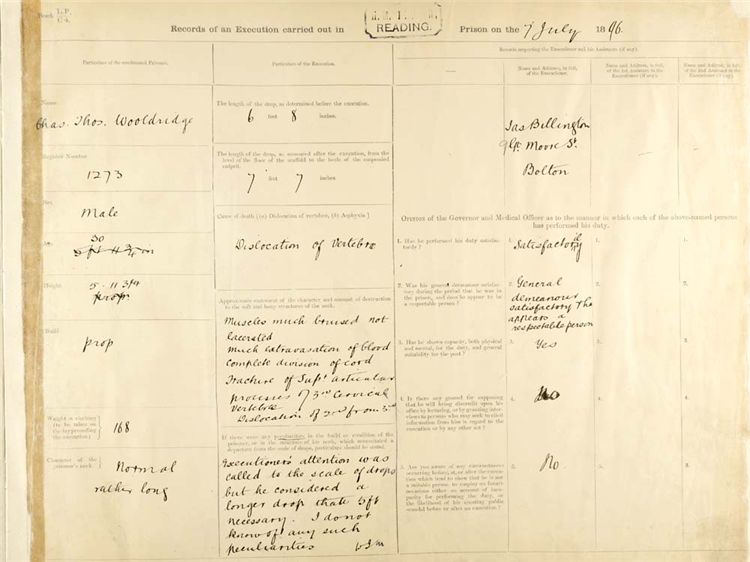 On 30 March 1896, the subject of Wilde's Ballad of Reading Gaol was admitted to the prison.

The day before, Wooldridge had travelled from his Army barracks in London to see his wife, Ellen, in Clewer. They had been married for 15 difficult months, and had been forced to live apart for most of those. Ellen had recently asked him not to visit her again. The letter incensed him. Now, as he crossed the threshold of their terraced home, he cut her throat.

Wooldridge gave himself up immediately to the police. He explained that he and Ellen had quarrelled, that he suspected her of having an affair, and that his anger had driven him to murder.

There was some expectation locally that, despite his guilt, Wooldridge might be spared the gallows. But mercy was not forthcoming, and he was condemned to death at the assizes on 18 June 1896.

Some 19 days later he was hanged at the gaol in the hut that served as the photographic studio. This register entry records the mechanics of his death, as well as providing feedback on the conduct of his executioner. 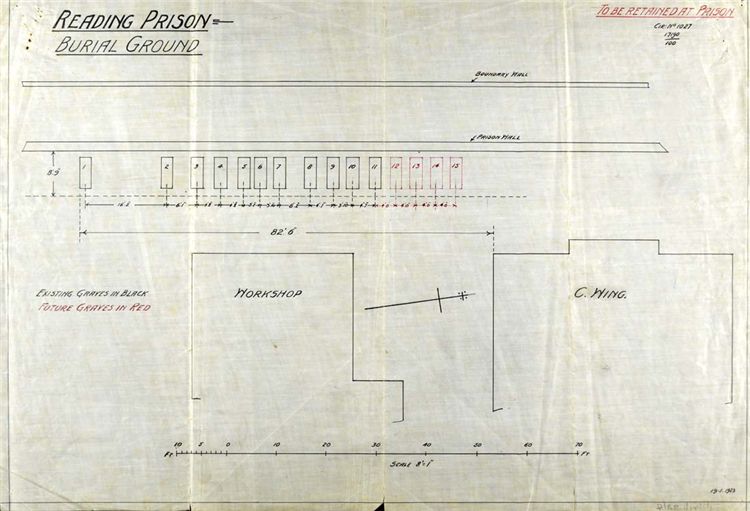 The graves of executed men

This plan shows the 11 plots at Reading in which hanged men were interred. The space was originally part of the gaol gardens.

All the graves were marked at the time of burial, but these markers were removed in 1923 on the orders of the Home Office, who considered them "undesirable, as they perpetuate the memory of the crime and cause unnecessary pain to relatives and rouse a morbid interest in the prisoners".

The list of graves denotes which man was in which plot and was presumably compiled from the missing markers. "TJ" was Thomas Jennings, and "WS" was William Spice. The Tidburys were brothers who killed two policemen while out poaching near Hungerford. 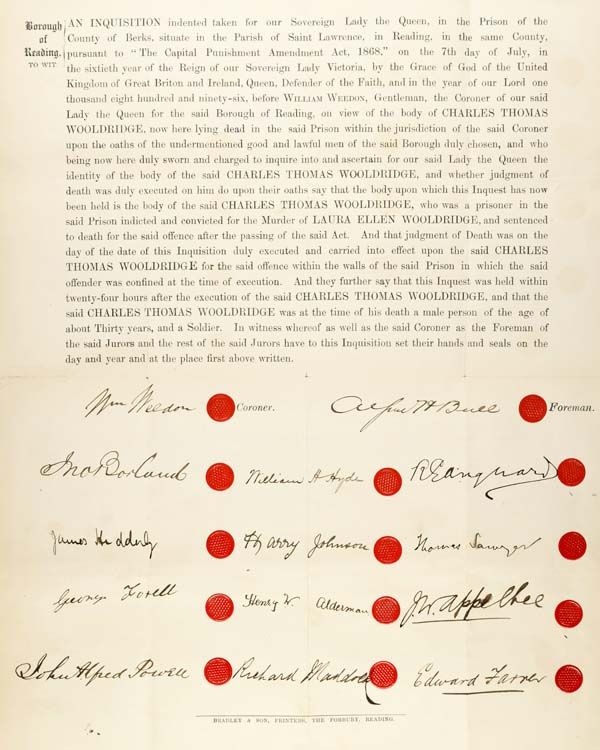 The coroner's inquest for Wooldridge

In line with the legal requirement to investigate all sudden deaths, the coroner for Reading Borough was obliged to hold an inquest on the executed man. The coroner's signature, and those of the jury empanelled to view the body are appended to this record of the event.

A typical Victorian inquest is either handwritten or a blank proforma, with the common clauses printed leaving space for details of the deceased and verdict. Woolridge's inquest form is different. It was entirely pre-printed in advance of his end: a macabre reminder of a death foretold.