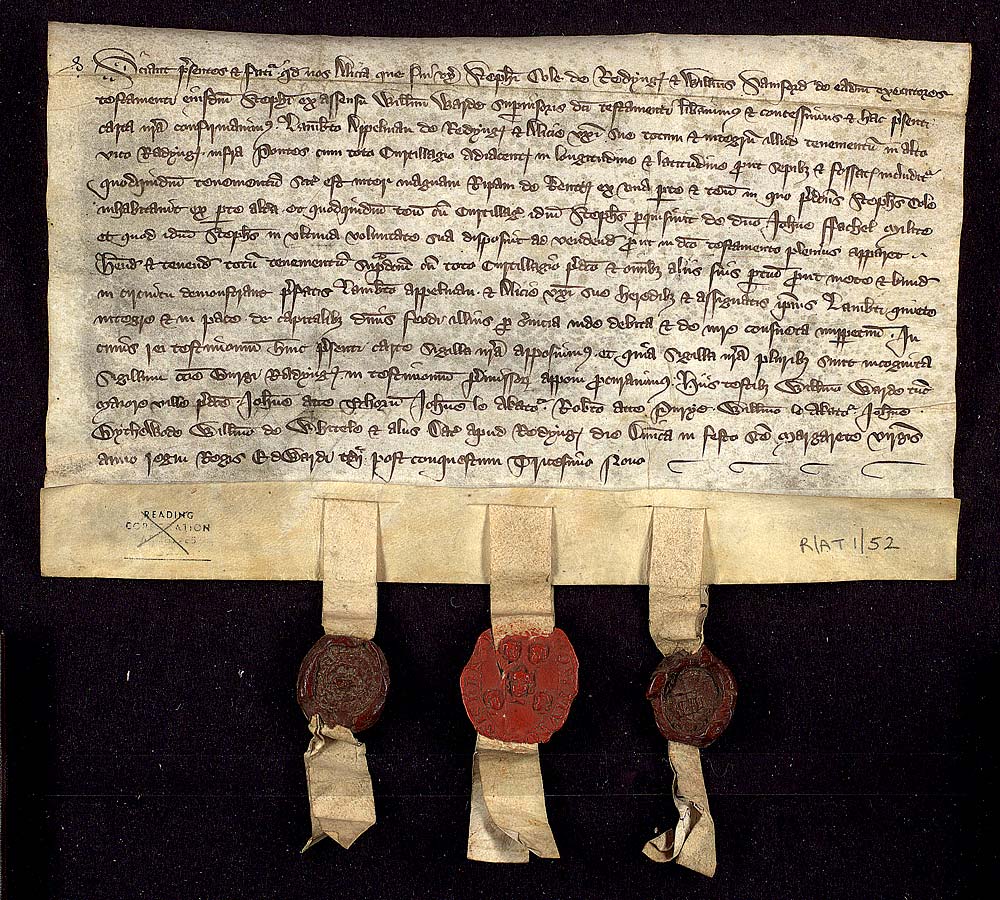 This deed, relating to a house and garden between High Street and the Kennet formerly owned by Stephen Cole, has the earliest known representation of the Borough coat of arms. This appears on the middle seal attached to it. At this date the arms represent those of the Merchant Gild. In contrast to the later arms, the seal shows five male heads as opposed to five female ones. 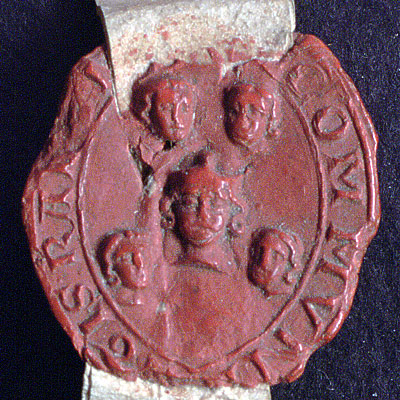 This close up of the seal shows the detail of the five heads, which would later become part of the design of the Reading Borough arms. 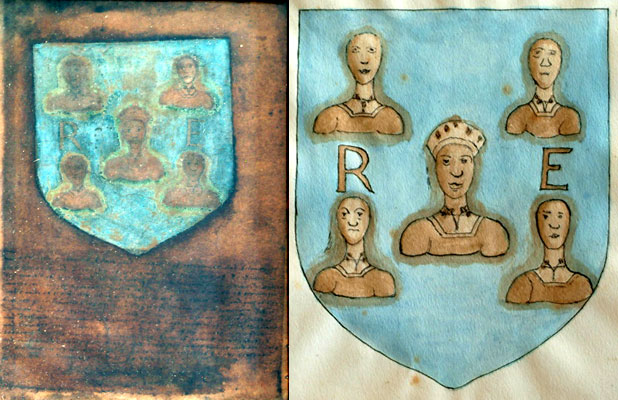 This is the first of two original grants of arms. They were both given the same colour wash treatment as the earliest surviving charter by the British Museum in 1934, making them virtually illegible. The sketch shows how the colours would have looked originally.

The first grant in 1566 confirms the ‘ancient arms and seal’ of the Corporation. This grant arose out of one of the periodic Visitations of the Heralds to enrol legitimate arms. The five heads from the Borough seal have now become female, and the letters ‘R E’ have been added. There has always been some debate as to whether this is the first two letters of ‘Reading’, or ‘Regina Elizabetha’, in honour of the Queen at the time. 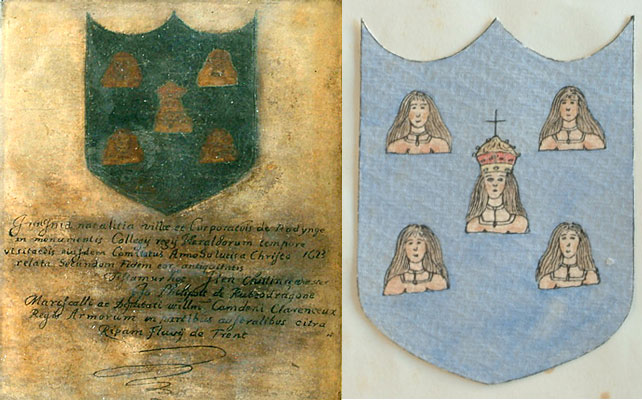 This second grant of arms was restored by the British Museum at the same time as the earlier one. It was made after the Herald's Visitation of 1623. The sketch to the right shows how the document would have looked before restoration.

There are some slight differences in the way that the figures are drawn, but the principal difference from the 1566 grant is that this version does not include the letters ‘R E’, lending weight to the theory that their previous addition had been solely to praise the reigning monarch. 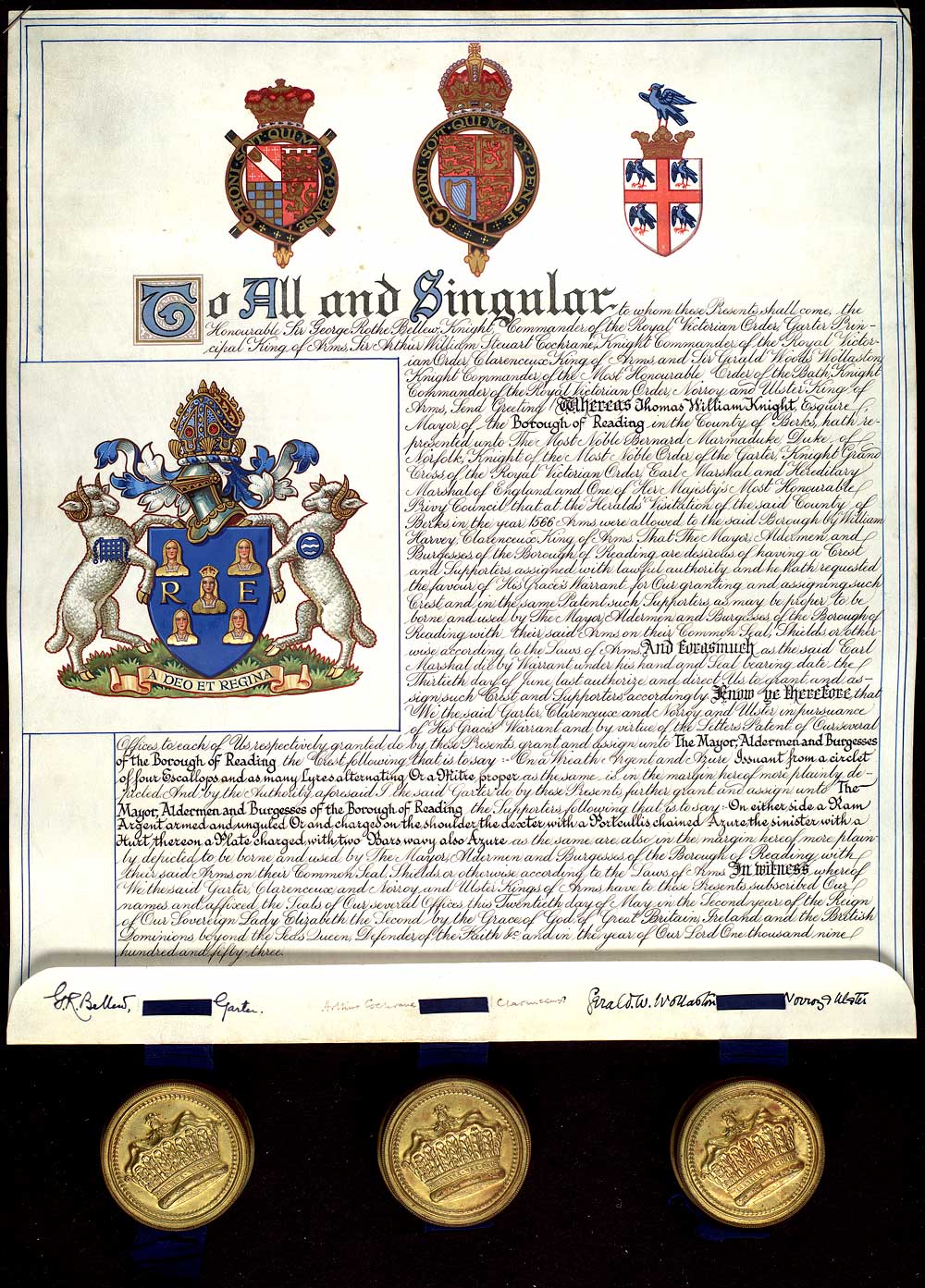 When the Borough applied for a new grant of arms in 1953 it was to gain supporters (the rams), a crest (the abbot’s mitre) and a motto (A Deo Et Regina – from God and the Queen). The Borough worked with the College of Arms to secure the final design, which also restored the letters ‘R E’ to the arms. It is this version of the arms that is in use today.