A School Visits the BRO

On Monday 13 June 2022, we welcomed thirty Year 5 students and their teachers from Kennet Valley Primary School for a visit to the Berkshire Record Office. They had been studying urban sprawl and reached out to us to see if we had any material which might help demonstrate this. Two of our archivists, Rosie and Hannah, planned a one-hour session using aerial photographs and OS maps to show urban sprawl in the area of their school.

Aerial photographs are a useful snapshot of Berkshire at a particular moment in time. These are created when a plane flies in straight lines across the whole county and takes photographs of the landscape below. We explained to the students that there are two kinds of aerial photographs, vertical and oblique. Vertical photographs are taken by a camera that is mounted underneath the plane and gives a bird’s eye view of what’s underneath. The result has a similar appearance to a map.

By contrast, oblique photographs are taken by someone leaning out of the aeroplane at an angle. This gives you an idea of the elevation, scale, and perspective of the buildings and landscape. At the BRO, we hold vertical aerial photographs. Obliques can be found at the Historic England Archive.

We put out vertical photographs of the area where the school was built in 1964, 1976, 1986 and 1996. The students quickly took to these as their appearance is comparable to Google Maps, which many of them were already familiar with. 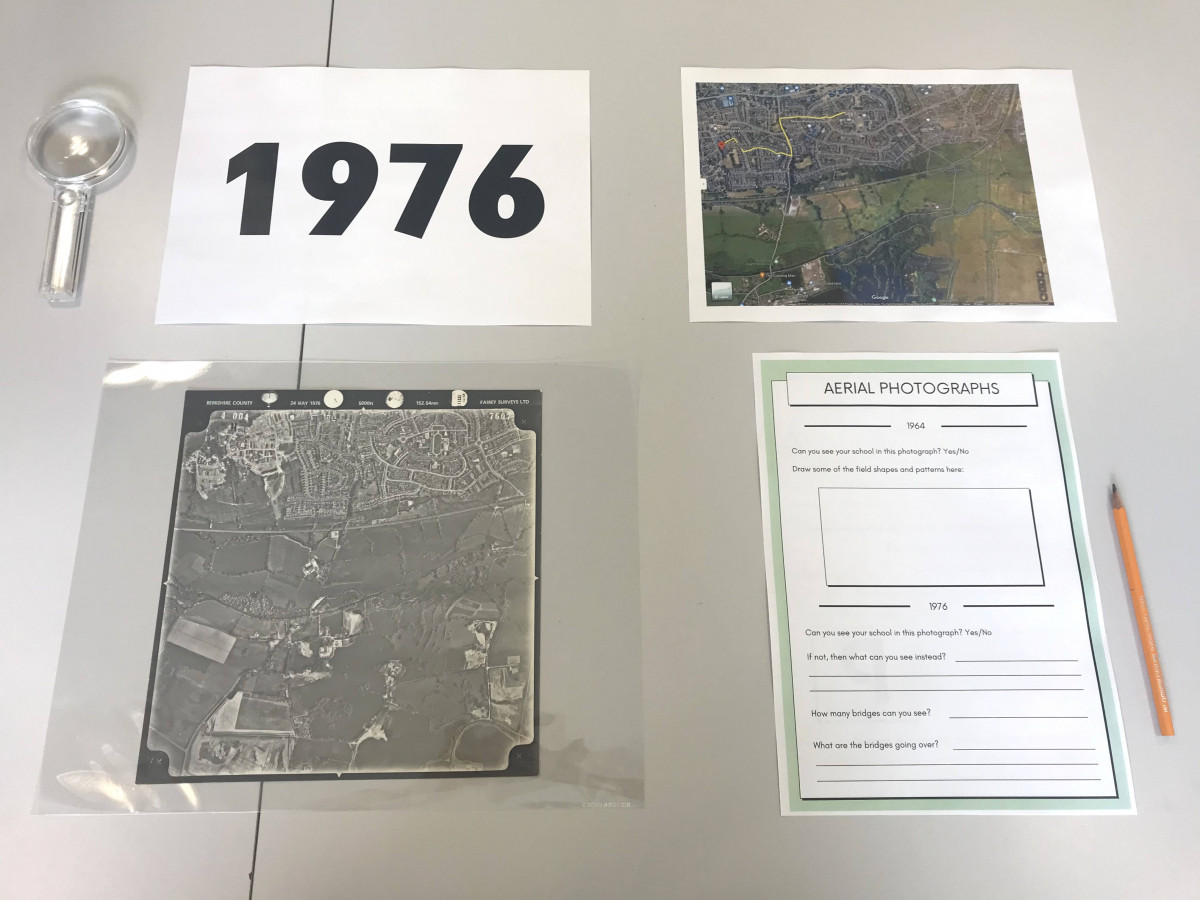 To get the students to engage with the idea of urban sprawl, we provided a worksheet for them with questions to work through to help them spot key changes to the local area. We began with identifying distinctive shapes, such as a housing estate shaped like a ‘P’, in order to get our bearings and locate the area where the school should be. The photograph from 1976 shows a blurry, white patch which appears to be a construction site where the school was in the process of being built. They then examined the field shapes and farming lines which are uniquely visible in aerial photographs.

The students did an excellent job of spotting the differences between the earlier and later photographs. They identified differences in the local area over time, such as the reduction in green spaces and the increase in houses. But also, the differences in the photographs themselves and what they offer to researchers. The earlier photographs are black and white, whereas later ones are in colour. It can also be seen that the plane was flying at different heights in each decade and therefore the photographs provide varying levels of detail. Not only did the children learn about urban sprawl in their local area, but they also learnt about how these resources were created and what information they can provide to a researcher at the BRO.

Most likely, we all use maps as part of our day-to-day lives to plan journeys, find out where something is or how long a trip will take. However, historical maps are a really useful resource to see how areas of land have changed over time. We hold many Ordnance Survey maps ranging from the 1870s to the 1990s. We found four maps from 1961, 1976, 1983 and 1992 showing the area where the school was located and displayed them on a table for the students to see. The OS maps were ideal for demonstrating urban sprawl as the school and much of its neighbouring housing was built in the late 1970s and early 1980s, so did not appear on the first two maps at all. 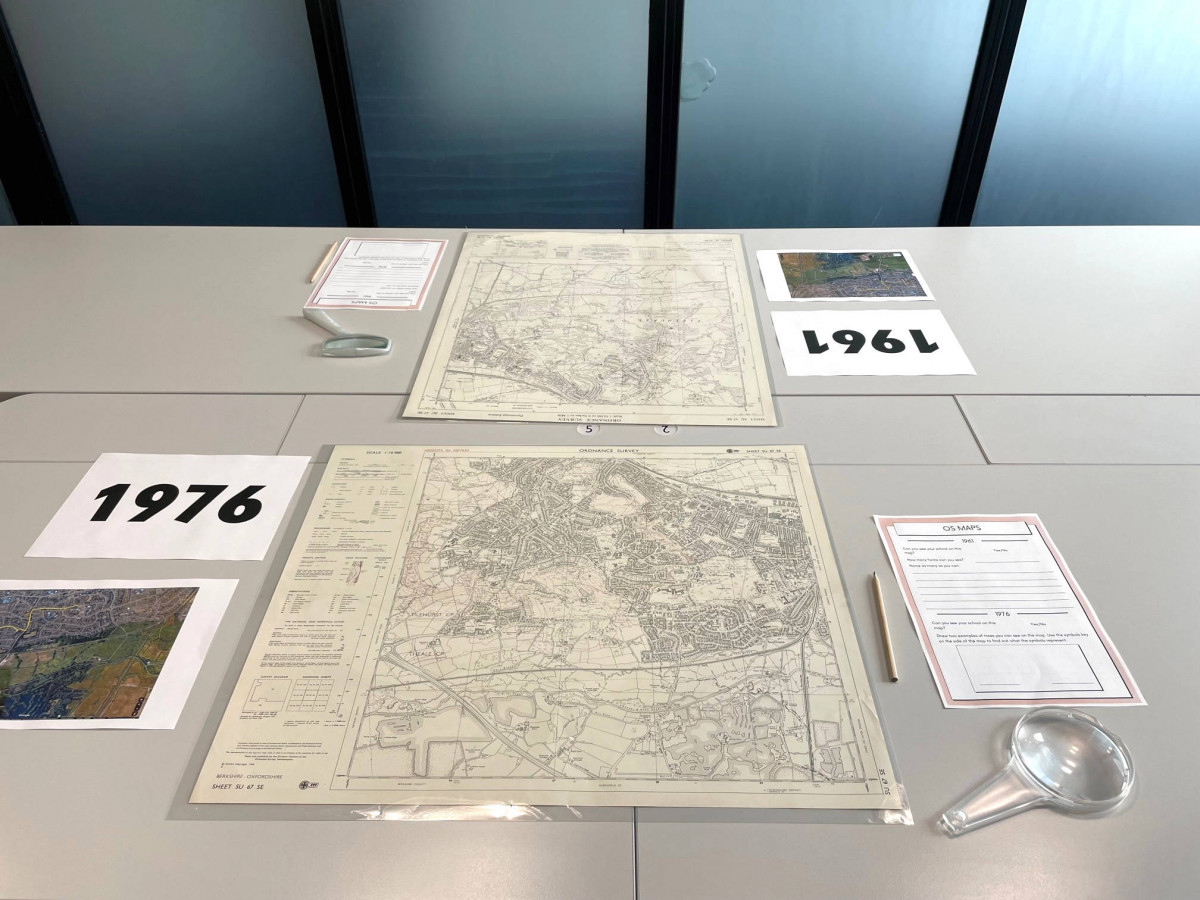 Again, the students made their way through worksheets to spot signs of urban sprawl and change. One of the tasks was to count the number of farms shown on the 1961 map and 1992 map, then to compare the results. Providing our counting was correct, there were 19 farms in 1961 but only 7 in 1992 as the farmland had been built over. This helped the children see the effect of urban sprawl and really engage with the maps.

The students really enjoyed looking at the maps and spotting familiar locations like their school and local parks. The size of the maps was a challenge as the children were tempted to identify any building with ‘sch’ next to it as being their school despite being in completely the wrong area of the map! Despite this, there was lots of excitement when they did finally spot their school or realised that it wasn’t present.

We really enjoyed introducing a younger audience to archives. -hopefully there were some budding archivists and local historians among them!