We have completed cataloguing of records of the Earley Carnival, 1980-1996 (D/EX2708).  First known as the ‘Carnival in Earley’, the aim was to create a sense of community and raise money towards local facilities. The first carnival in 1980 was a three day-event, expanding the following year to a full week of events culminating on Carnival Day on Saturday 19 September. The carnival continued to grow exponentially, and by 1982 there were nine events spread out over a two-week period. In 1983, the construction of the enormous Lower Earley housing development was underway, and the builders sponsored the Carnival that year which enabled them to have a helicopter. Over the years, the proceeds of the carnival paid for the construction of a community centre, the first Earley bus service, and an ECG machine for Brookside Surgery. The last Earley Carnival took place in 1996. 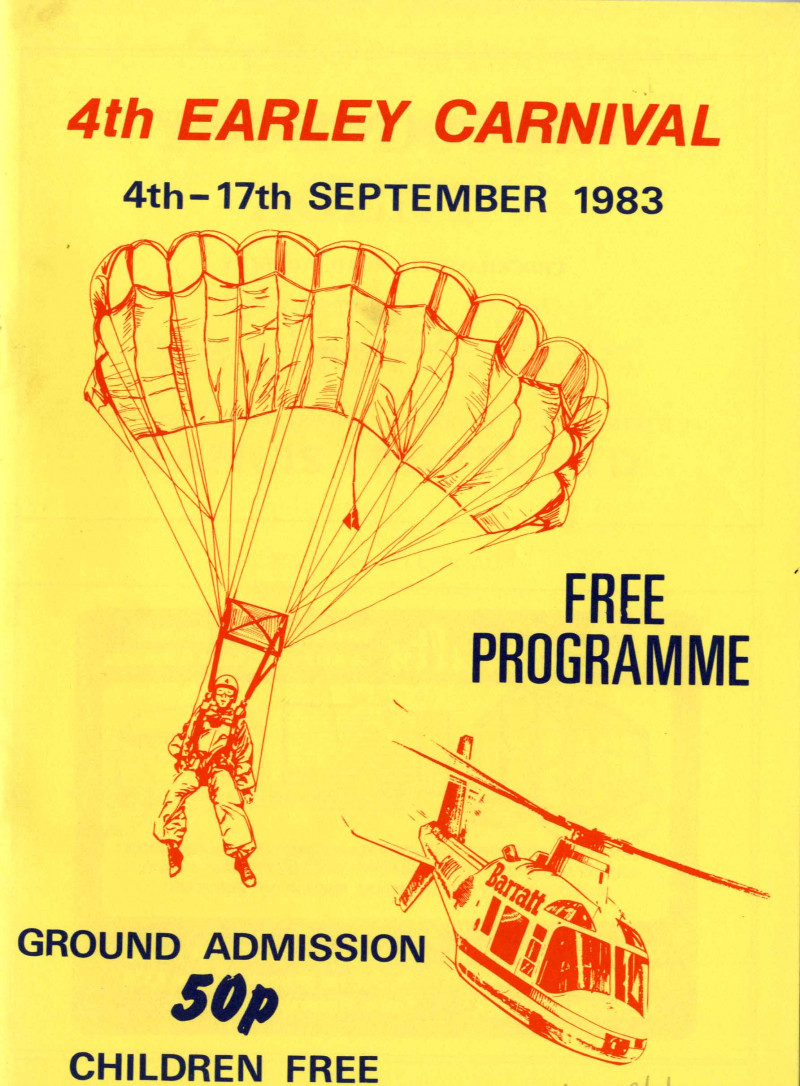 We have been given records of P J Drew Ltd of Reading, ironmongers, 1864-1956 (D/EX2777). This business, which traded as Drews the Ironmongers, was established as a limited company in 1929 and closed in 2018. It was founded by Percy John Drew, formerly a manager for Callas Son & May, general ironmongers, in Oxford Road, Reading. Having been dismissed in 1920, he set up his own rival business. In 1931 'Drews' acquired premises at the corner of Friar Street and Greyfriars Road in central Reading, with a separate yard  in Vachel Road to store heavy or bulky products. In 1979 the shop moved to new premises, converted from malthouses built in the 1870s, at 71-73 Caversham Road, premises which gained local listing status in 2020. The records include deeds of property in Stanshawe Road, 1864-1915, and Vachel Road, 1864-1948, although there are no records of how the business was run.

From nuclear war to poop a scoop: the concerns of a council

We are pleased to announce that minutes and agenda papers for Newbury District Council, 1974-1998 (DC/N), and its successor West Berkshire Council, 1998-2004 (DC/WB) have now been listed. They cover the whole range of the council’s decision making, but the largest sub-group are the agenda papers for the Planning Committees – there are 100 bundles just for the period 1974-1998! Perhaps the most interesting items are the decision books, 1973-2006, which record all the motions put by members for discussion (DC/N/AC6/1 and DC/WB/AC6/1). The subjects range from ones of purely local interest to more political points. There were moves to change the council name to West Berkshire as early as 1973, before it had even gained full operation status. Several relate to the peace protests at Greenham Common: motions to provide a legal site for the protestors, 1982; to request additional policing of the camps, 1983; and for the future use of the site following decommissioning, 1990-1997; and there were also concerns about safety at AWE Aldermaston on several occasions between 1993 and 2005.

Europe was also a subject of interest to councillors, with motions to support the provision of advice to Poland and other Eastern European countries newly experiencing political freedom, 1990; fostering international activities with reference to the new Single European Market, 1990. Party politics raise their head with rival calls to welcome the proposed new Community Charge to finance local government, and to abolish this 'poll tax' and introduce a local income tax instead, both in 1990. There was a request to ban smoking at indoor meetings in 1976; to introduce a 'poop-a-scoop' scheme for dog faeces in 1992; and to campaign for a tax on plastic shopping bags in 2004, all before they became part of national law. In 1994 one councillor wanted fax machines and answerphones to be installed at council expense in councillors’ homes.

We have also completed cataloguing the minutes and agenda papers of Bracknell Forest Borough Council, 1973-2017 (DC/B).

For the edification of the godly

Newly deposited Methodist records include minutes and accounts of the Sunday School at Newbury Primitive Methodist Church, 1844-1931 (D/MS2). In 1833, a sermon preached at the ordination of the Revd John Stoughton, assistant pastor at William Street Independent Church, Windsor, was published for the edification of the godly (D/EX2636). It includes his testimony of his conversion experience as a teenager in 1825. 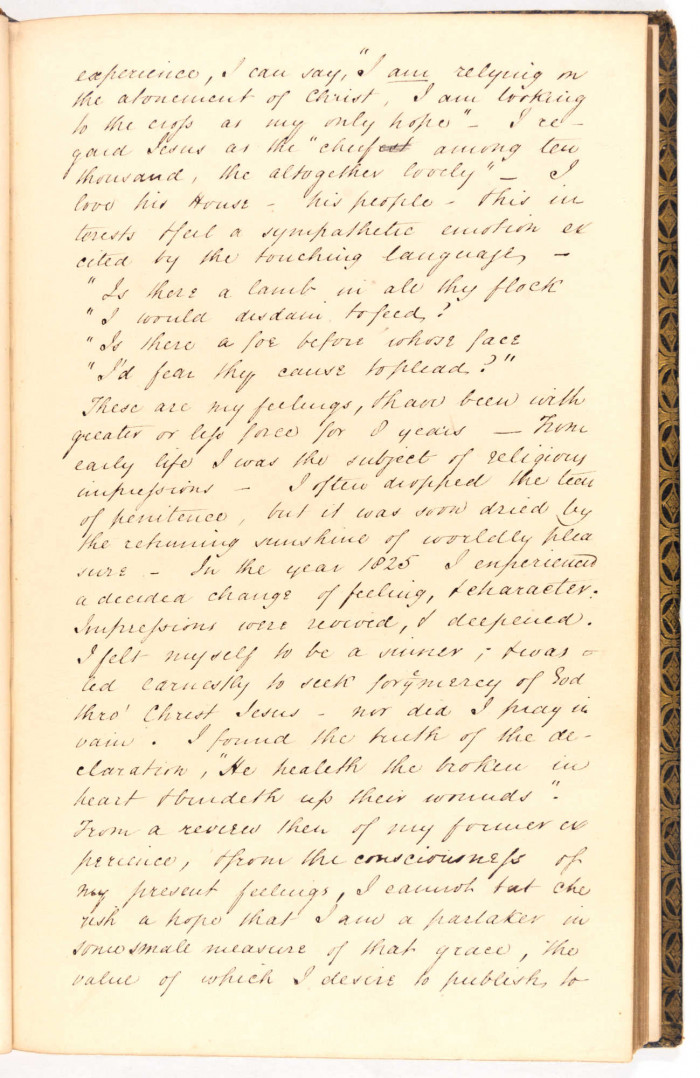 The interests of women: marriage settlements and other personal papers

We have acquired the marriage settlement of the Revd Frederick Young and Mary Ellen Payne of Reading, 1855 (D/EX2615).  Also new is the marriage settlement of John Bedborough and Emily Radnor and related deeds 1869-1902 (D/EX2622). Marriage settlements were a way to protect women’s property from their husbands’ families, as married women were not otherwise able to control it. We have also acquired a collection of the writing of Winifred Darter of Caversham, c.1950s-1990s (D/EX2722), and the papers of Frances Berry, a local historian and Mayor of Newbury 2002-2003 (D/EX2671).

One of the projects staff have worked on at home over the past couple of years, was to create a proper catalogue for our main collection of Berkshire postcards, previously only listed on index cards, which meant they escaped many people’s attention (POSTCARDS/). They have now been added to our online catalogue and a paper catalogue is also available in the searchroom.  Most are undated, and even if there is a postmark, the image itself may be older. However, most are early 20th century and comprise scenic views. The latest are images of peace protestors at Greenham Common in 1983. 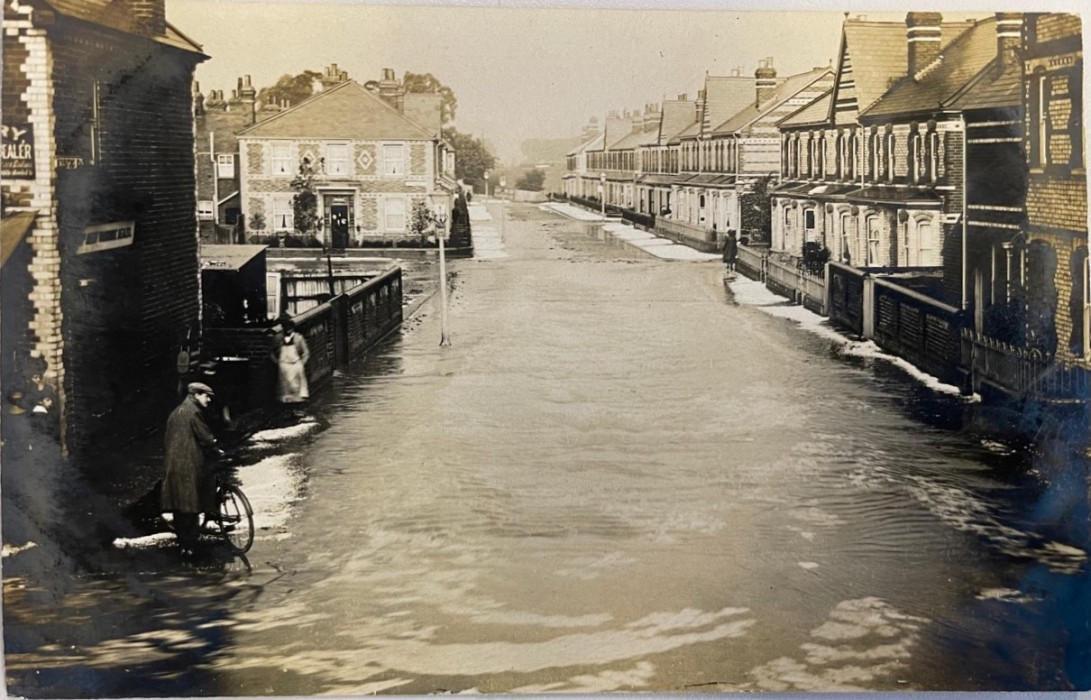 We have acquired a small miscellaneous collection of postcards with photographic images of various Berkshire scenes (D/EX2417). They include images of Huntley & Palmers’ Biscuit Factory, Reading; the Dairy School [presumably at Reading University]; Reading Temperance Prize Band; and a couple of views of flooded Reading streets in 1910. With thanks to our social media followers who identified one of these as being Beresford Road (shown above).

You can find out more about these records by searching our online catalogue. Simply enter the collection references mentioned into the Catalogue Reference field.