85 years ago, in May 1937, 3,826 children (aged 5-15), 96 teachers, 118 young women and 15 priests left Bilbao, Spain bound for Southampton, England as the civilian casualties from the Spanish Civil War mounted. The destruction of Guernica in April 1937 had caused outrage in the international community and there were calls from both at home and abroad for Britain to offer temporary asylum to children.

The British government were hesitant to offer relief, given the non-intervention policy they had signed. However, they eventually agreed to allow the children to come, on the basis they would not be financially responsible for them. It was therefore the National Joint Committee for Spanish Relief, volunteers, charities and religious organisations that raised the money and cared for the children.

When they arrived, the children were housed in North Stoneham in Eastleigh where they stayed in tents. Conditions were not very good and the children were soon sent to ‘colonies’ around the country. Two such colonies were in Berkshire at Baydon Hole Farm near Lambourn, and Bray’s Court in Maidenhead.

Children started arriving at Baydon Hole Farm in June 1937. They were housed in 3 large huts built for their arrival. The Berkshire Section of the National Joint Committee for Spanish Relief was responsible for their housing and had to deal with the logistics including issues regarding the supply of water, as seen in this letter (ref. D/EX898/2/759): 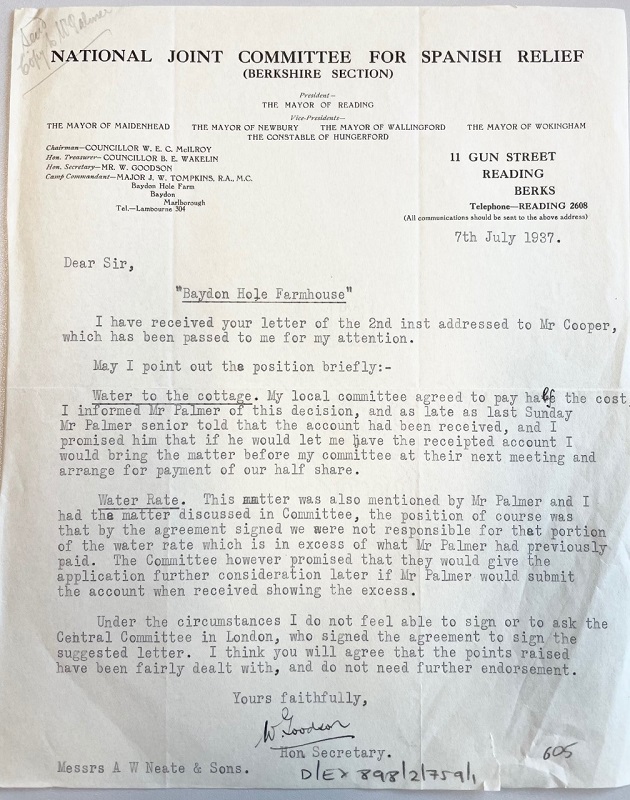 By the summer of 1937 the process of repatriation had begun. However, many of the children could not go home so remained in Britain. The conditions at Baydon Hole Farm were not suitable for housing the children over the winter, so the Berkshire Committee, under the chairman Councillor W. E. C. McIlroy, J.P., sought a suitable alternative. They settled on Bray Court, Maidenhead, a former private residence, hotel and night club. In October 1937 over 100 children moved there.

The children were welcomed to the area and an effort was made to respect their cultural traditions. The Rotary Club of Reading hosted the children at a Christmas party held on Thursday 6 January 1938, as the children traditionally received their gifts on the Feast of Epiphany, Twelfth Night, rather than on Christmas Day. The entertainment included a cinematograph display by W. A. Smallcombe, conjuring tricks by Mr H. T. Morley, J.P., and of course a visit from Father Christmas.

Throughout 1938 the children were involved in various events in the local area. An exhibition of the handiwork by the children was opened on Wednesday 26 January. In May 1938 they took part in Reading Labour Party’s annual May Fair and this is the timetable of events for the day (ref. D/EX1485/9/58/3) : 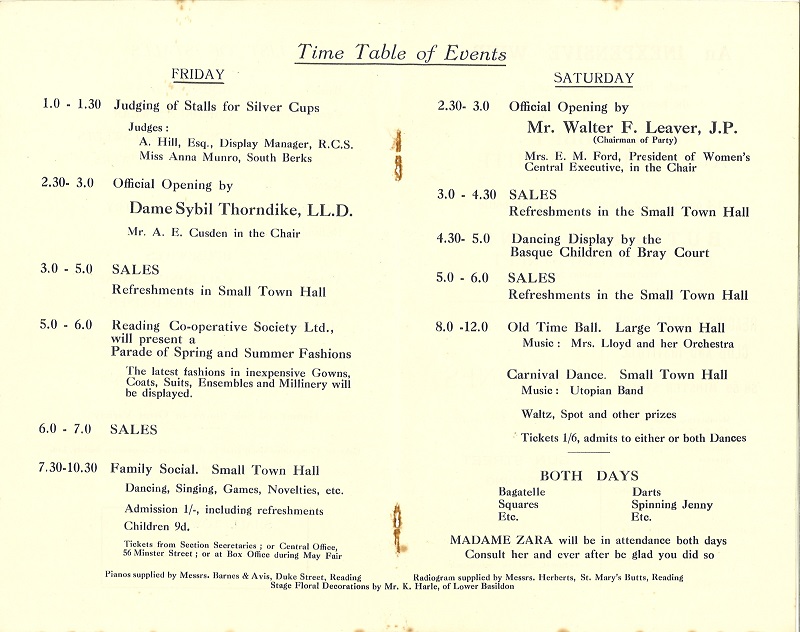 Entertainment was also held at the Memorial Hall in Peppard, demonstrating traditional Spanish dances and songs. The image below shows children of Peppard School and Basque Refugees and is from The Reading Standard 20 May 1938. A fete was also hosted at Bray Court in July which included various stalls and a play put on by the students of Maidenhead County Girls’ School. 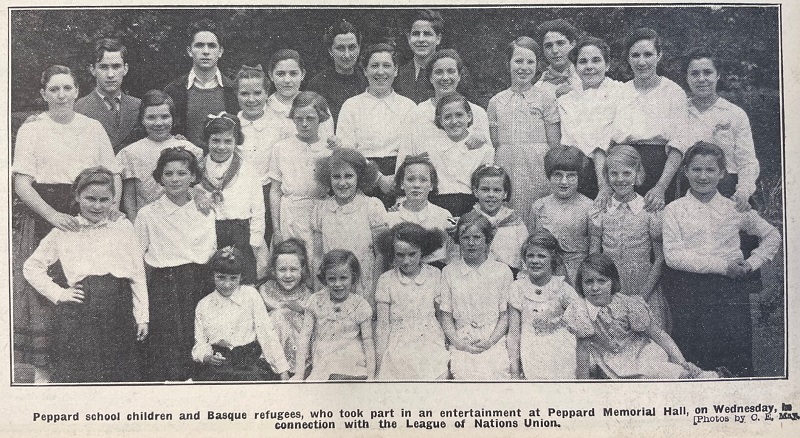 During their stay at Bray Court, children continued to be repatriated home. By July 1939 there were only 30 children left so the decision was made to close the home. Most of the other colonies around Britain were closed by this time, although there were still around 400 refugees in Britain at the start of WWII. Some of these could not go home as their parents were either dead or imprisoned, whilst some chose to stay, as those over the age of 16 were given the choice. Bray Court’s association with refugees did not end with the leaving of the Basque children in July 1939. By October 1939, Czech refugees were housed there as part of a programme organised by the Czech Refugee Trust.

We were able to develop this story by looking at numerous newspapers and connecting them with archives held at the BRO. The newspapers we used were The Reading Standard 7 January 1938; 28 January 1938; 20 May 1938 and 22 July 22 1938; The Reading Mercury 8 July 1939 and 21 October 21 1939. You can view newspapers online through the British Newspaper Archive.

We also watched the YouTube video by The National Archives UK entitled the ‘Basque child refugees: untold stories from the archives’ which you can watch if you would like to know more.

If you would like to know more about activities taking place to commemorate the 85th anniversary of the Spanish Civil War in 2022, please see the Association for the UK Basque Children website.