A meet to remember 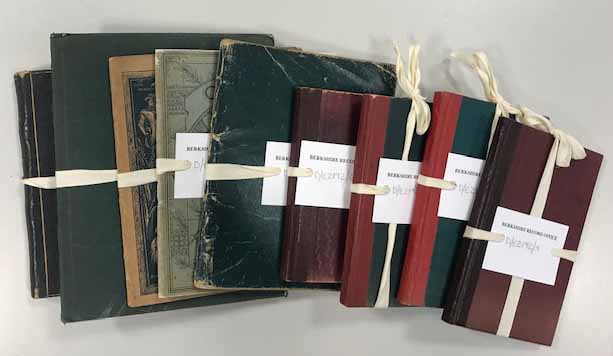 Foxhunting was a popular activity in the eighteenth and nineteenth centuries in England and as a result, many hunting diaries can be found within archives. Here at the BRO, we have a collection of hunting diaries belonging to members of the Arrowsmith and Bannard families of Littlewick Lodge, White Waltham (ref. D/EZ192). Prominent landowners in Berkshire, the Arrowsmith and Bannard families were connected by marriage.

The diaries begin in 1870 and end in 1980 and refer to many types of hunting including hare hunting, deer hunting and fox hunting. They reveal terms specifically relating to hunting such as ‘cast’ and ‘coverts’ which refer to the fact that when a fox hunt began, the hounds were ‘cast’; ‘coverts’ indicated the rough or brush areas into which a fox would be released.

They do not necessarily expand on terminology and the technicalities of hunting - presumably as their authors knew what it all meant at the time. However, factors such as temperature and humidity on the scent and how each pack of hounds had their own territory, and were synonymous with particular counties and terrain, are revealed.

What may not be expected from hunting diaries is the fact that they also provide a range of personal anecdotes which touched on humour, grief, friendship, hospitality, admiration, tradition and social etiquette. For example, when a close friend of the families, Mr Rigby, died in 1891, the entry for that day included a dedicated note to him:

"Farewell, old friend, God rest thy soul, Is what I wish for thee, And as the ages outward roll like billows on the sea, I trust in Heaven we may meet from sin and saviour free" 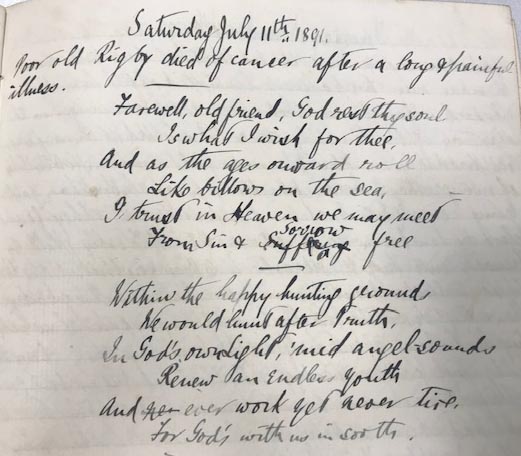 We discover in one diary that Henry John Bannard was involved in hunting from as young as 11 months - so it would seem that the practice of hunting was part of normal life for the family. Today's society looks less favourably on hunting, with fox hunting having been made unlawful, but whilst we cannot change the fact that the hunting took place, the details contained in these hunting diaries are a useful resource for local history. They include locations, personal names and dates of life events, as well as touching upon other themes such as the effects of war, loss, family and friendship. 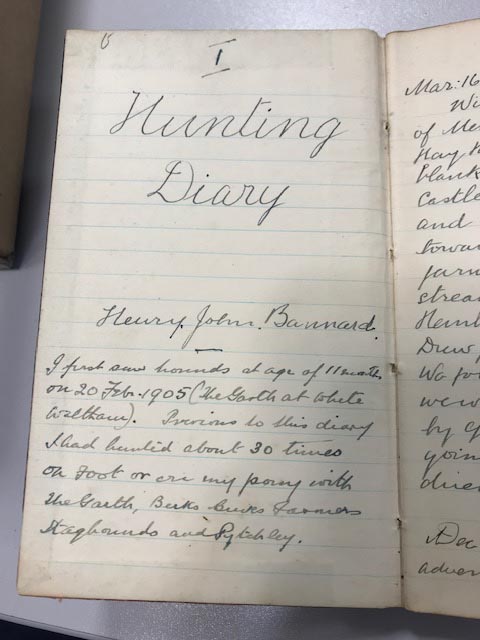