Armistice in Berkshire 100 years ago

11th November 2018 marks 100 year since the armistice that brought an end to the fighting of the First World War. At the BRO, we have a unique insight into the arrival of the news in Berkshire in the form of a memoir of Mr Mann, stationmaster at Windsor Railway Station (ref. D/EX1915/5/14). 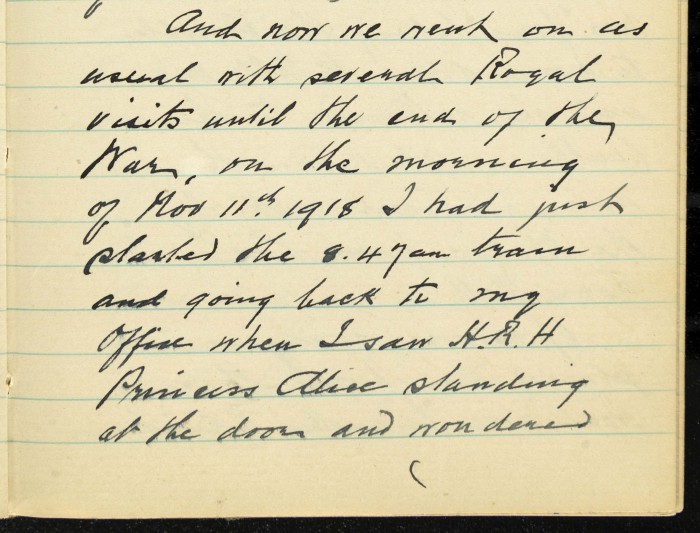 The passage shown records how Princess Alice, a cousin of King George V who had to agree the terms of the armistice and kept the Royal Family informed, passed the news on early. It reads:

“On the morning of Nov 11th 1918 I had just started the 8.47 am train and [was] going back to my office when I saw HRH Princess Alice standing at the door and wondered what she wanted so early. When I reached there she said “I have got some news for you. The Armistice was signed in a Railway Coach at 6.0 am this morning, but it is not to be made known until 11.0 am, but I was sure you would like to know, so don’t tell anyone until then.” I thanked her for taking the trouble to come down to tell me and she returned to the Castle.
At 11.0 am the news was given out by the Mayor from the Town Hall.
Of course everyone was pleased and hoped there would never be another like it." (ref. D/EX1915/5/14). 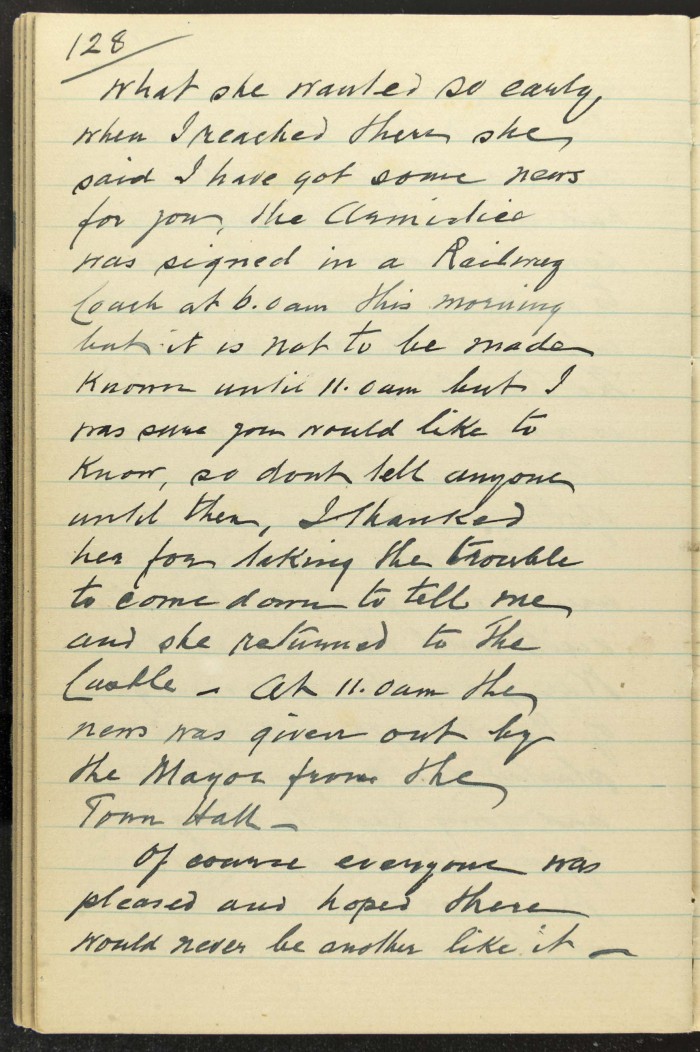 News was then spread, probably by telegram and telephone, so that the mayors of Berkshire towns were able to announce the armistice at 11 am. People responded with unbridled joy as they flocked spontaneously into the streets. We remember the Armistice now with silence (first introduced for the first anniversary of the Armistice in 1919), but that first time was a very noisy occasion. Church bells were rung across the county, factory hooters blasted, sirens wailed – every imaginable noise, and we can see this referred to in the records.

One parish magazine from Earley (ref. D/P192/28A/15) tells us "On Monday November 11 peace was declared at 11am by the continual blowing of all Reading hooters followed by ringing of church bells and a general half holiday2. Broad Street was packed with crowds rejoicing and setting off fireworks. In Bracknell "The news was received … about 11 o’clock, and spread rapidly far and near. Groups gathered together, discussing the news, and the street was soon gay with flags" (ref. D/P151/28A/10/10).

We have an account from Newbury that “The streets presented a very gay appearance, and there were processions (authorised and unauthorised) much to the delight of the young. All the fireworks possible to be obtained were let off in the streets, and one unexploded bomb was found inside the Churchyard gates, and handed over to the police. It appeared afterwards that another member of the Police Force had put it there for safety. We were very glad to see the excellent and sober spirit of the merry-makers. It was indeed an occasion for rejoicing with great joy.” (ref. D/P89/28A/13).

At Riseley Common primary school, staff and pupils heard sirens and bells, and, the headmaster wrote in his log book (ref. C/EL99/3), "Acting on the assumption that peace has been declared (or rather an armistice arranged), he set the children to sing the National Anthem". In schools across Berkshire, singing was a frequent response – mainly patriotic songs mixed with hymns of thanksgiving. Union Jack flags were raised in school playgrounds. In some places the children were then sent home for an impromptu holiday. In others, schools were already closed due to the dangerous influenza epidemic which was sweeping the country.

More formal celebrations would follow, organised mainly by local authorities. Church services were organised throughout the following week, and on the first Sunday after the Armistice, as churches were filled with people wanting to give thanks.

More sober reflection would follow, as the cost of the war in human lives was remembered. So many young men would never come home. The vicar of Reading St Giles wrote the day after the Armistice,"‘I could not but help feeling yesterday morning as I heard the syrens and whistles go at eleven o’clock, and I am sure you must have felt the same: suppose it had been the other thing, not victory but defeat. … Rejoicing at the great victory and at Peace is alas touched with feelings of sorrow and sadness, as they think of those loved ones lying in nameless graves or buried beneath the little white cross. … We do not forget the gallant dead, who poured out their life’s blood on the field or in the hospitals or on the seas. It was not we who won this war: it was the soldiers and sailors: all gratitude to them, the Dead and the Living who have won our Peace." (ref. D/P96/28A/35).

We remember the Armistice as the end of World War One, but in fact it was intended as a temporary end to fighting while peace negotiations were carried on in Paris. The final peace treaty was signed in June 1919, which was the sign for another set of organised public peace celebrations. You can discover more about the end of the war as well as life in Berkshire during the war, through our WWI blog.