Being born to unmarried parents was a stigma in the past, but documents reveal that it didn’t mean that fathers never cared about their illegitimate offspring. In the late Georgian period, farmer John Webb of Norcot, Tilehurst, had four illegitimate children by three different women, as revealed by his 16-page will and related papers, which have recently been catalogued (ref. R/D206/1/1-2). John had previously been married and by the time he made his will in 1821, had two adult children by his late wife – although it is not clear when she died and he started his series of relationships with younger women of a lower social status than his own.

He had two sons with Elizabeth Castle of Reading and in 1802 entered into a formal agreement to maintain the boys. In his will John left them £200 each when they reached the age of 25, and a further £200 after the death of their half-sister Sarah. However, Charles received this legacy before his father’s death, in 1826.

Then in 1808 John had a daughter named Ann with Ann Coombs of Milton in north Berkshire. As we can see from the image below, John agreed that he would pay Ann an annuity of £25 a year for life, to be continued if she died until their daughter reached the age of 21. When she was 21, young Ann would receive £500 cash. 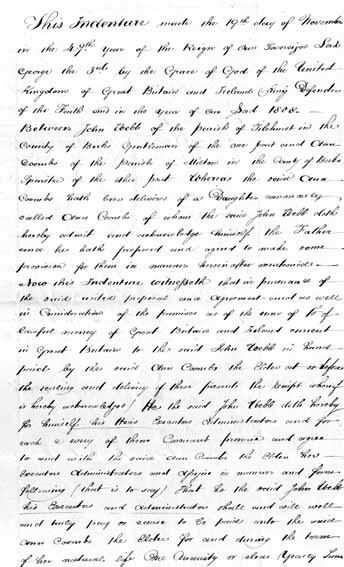 By 1821 John was openly 'living in sin' at Norcot Farm with his ‘housekeeper’, Christian Grace. He had been paying her an allowance of £50 a year since 1817, which was confirmed in his will for her lifetime, as long as she did not marry another man. A codicil made to the will in 1826 also gave her a lump sum of £200. She was also to be allowed to stay at Norcot Farmhouse and keep chickens in the farmyard there.

John and Christian had a son, Thomas, then aged six, who was also left a lump sum of £1000 at the age of 25; the 1826 codicil doubled this legacy to £2000. £50 per year plus a further £20 if Christian married, was promised to the trustees of the will, who included Thomas’s adult half-brother William Butler Webb, to be used for the maintenance of the boy and the cost of getting him apprenticed as a teenager. This was increased to £100 in 1826. John wanted Thomas to live with Christian as long as she stayed single, and then he was either to be apprenticed to learn a trade or instructed by William in agriculture.

In contrast, John’s legitimate daughter Sarah received an annuity of £200 per year, and had almost certainly already received a large dowry when she got married. Son William was the main heir, with an inheritance worth several thousand pounds. The estate was entailed on any sons he might have, then to his daughter Caroline. If William’s children did not leave children of their own, the estate was set to revert to his half-brother Thomas Grace, youngest of John’s children and, we may guess, his favourite. However, this inheritance never came to pass, as William and his wife Caroline had a daughter (Caroline Sarah), and although she died young, the estate eventually passed to her daughter, Caroline Elizabeth Waldron. Christian embarked on a series of lawsuits in 1829 to secure her and her son’s rights to what John had left them. The fight went on until 1855, outlasting Thomas himself, who had died by 1849.

This story may provide the only evidence for the paternity of John Webb’s children as the baptism entry for young Thomas in 1815 just records him as the ‘base born son of Christian Grace’ – no mention of his father, whilst if Ann Coombs was baptised at all, it was not in her birthplace of Milton. What it does reveal is how John ensured that his offspring, legitimate or otherwise, were looked after following his death.