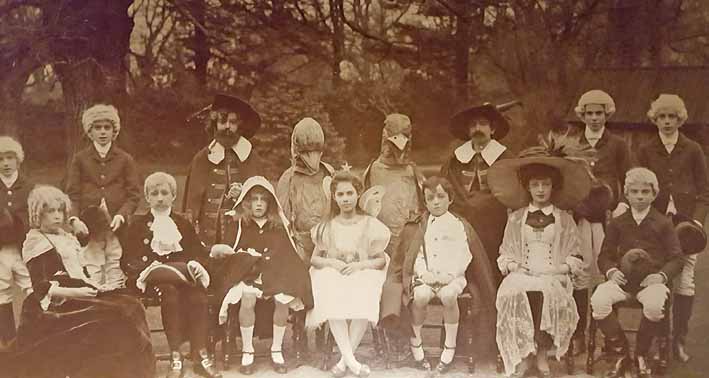 The month of December will most likely see many pantomimes and plays being performed in local theatres and schools around the country. Such practice has been around for a long time - a tradition one could say. Looking through school records can give us an insight into the children who went there and what they did. The Christmas play is no exception and here we have a 1910 photograph of pupils from Lambrook School, Winkfield Row, Winkfield who are all dressed up as characters from 'Babes in the Wood' (ref. D/EX1832/11/21). 'Babes in the Wood' is a tale of two orphans whose uncle tries to have them killed. Despite the murderers not carrying out the request, the children are left alone in the woods where they eventually die. Perhaps not the most uplifting of stories for the children to perform!

The house where Lambrook School was based, was built in 1853 for William Budd. In 1860, Robert J. Burnside acquired the property and set up a preparatory school for boys as he wanted to attract pupils from the Royal Court at Windsor - apparently two of Queen Victoria’s grandsons attended the school in the 1870s. Burnside had previously tutored boys at his home in Blackheath, London and he remained Headmaster at the school until 1883 when Edward Dillon Mansfield took over.

Mansfield was chairman of the Association of Headmasters in Preparatory Schools and retired in 1904. He was succeeded by The Revd Francis Deshon Browne. Browne organised the building of the school chapel in 1905 which was extended in 1959. Following a succession of headmasters, the Revd Philip Brownless took over in 1956. He made many improvements to the school buildings and steered the school towards the status of a charitable trust. In 1997 Lambrook merged with Haileybury Junior School, Windsor to form Lambrook Haileybury School. By 2009 however, it separated from Haileybury to run independently as Lambrook School.

School records can tell us more about where and how ancestors were educated, but can also reveal more about their actual lives. There are not always photographs available to help us see what our ancestors may have looked like, but it is amazing what information can be obtained from the written record. You might discover that your ancestor was the head boy or girl; or perhaps they were good at sport or even that they were punished for talking in class! If photographs like the one shown do survive, you may even discover that your ancestor was the lead in the annual Christmas play.